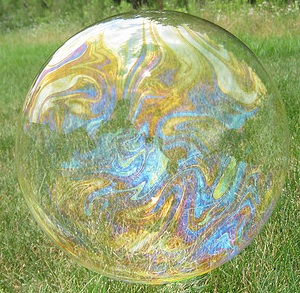 Bubble or no bubble, the conditions brewing in Silicon Valley around hot new startups now differs greatly from the tech collapse of 1999 to 2001 because most of today’s new companies are actually making money, Paul Santinelli, partner at early-stage venture capital fund North Bridge Venture Partners, told me today.

“There is a bubble mentality in venture financings, absolutely. But there are significant differences with this bubble compared to the one that existed in 1999-2001,” said Santinelli.

“Today, most companies are actually generating revenue and the cost to build and scale those companies is exponentially less expensive,” he said. “So, the capital required is less, which creates an interesting dynamic of a feeding frenzy.”

San Mateo, Calif.-based North Bridge was founded in 1994 and has over $3.2 billion in capital under management. The VC outfit is an early stage investor that focuses on seed and first round investments, ranging in size from $100,000 at the seed level to $10 million.

Santinelli said that right now, although there has been a lot of interest in the “cool kid” startups of Silicon Valley like social network Facebook, gaming company Zynga and microblogging service Twitter, most VCs are going to stay on the sidelines until these companies start indicating they are ready to go public.

“Ideally, it would be great to see the resurgence of an IPO market,” he said. “Once that window opens, and stays open, there is a catalyst for higher [mergers and acquisitions] valuations and a greater desire from entrepreneurs to go the distance and file for public offerings.”

Until that window opens, however, Santinelli said North Bridge would continue to focus on infrastructure startups because they are “filling the innovation void” and are a lot cheaper to fund.

He pointed out that as long as people continue to consume data, whether mobile, social, video, news, games or commerce, the need for innovation in infrastructure will be required for scale and improved price performance.