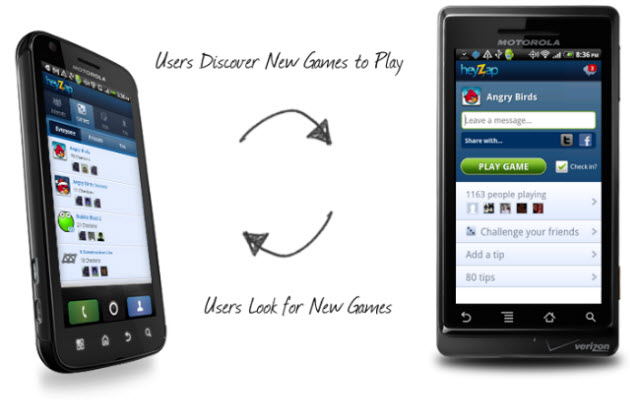 Shifting to the hot mobile market, social game platform firm Heyzap is launching a “check in” network for Android games.

With the network, users can check into the system and tell their friends what games they are playing at any given moment, said Jude Gomila, co-founder of San Francisco-based Heyzap. 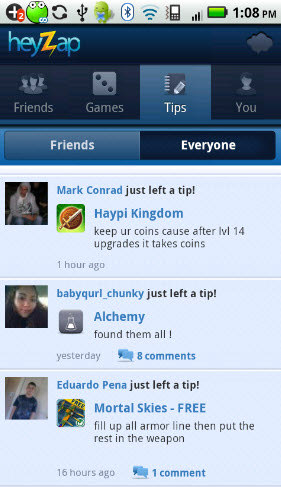 The announcement shows that the check-in craze is moving from location games to standard mobile games, and it shows once again that a company can innovate by adding a social layer on top of an existing platform.

“The next time you play Angry Birds, you can check in and find out what games your friends are playing or what they have played lately,” Gomila said.

That helps friends start a conversation about games, making the games more social. It also helps friends discover new games from people they know and trust, much like they do on Facebook, Gomila said, by viewing the news feed section of the user interface.

Heyzap has been running an alpha test on the new, free Android app, and it has already hit 250,000 check-ins on 3,000 different Android games. An iPhone app is coming soon.

The app is the first move into the mobile space for Heyzap, which started as a platform for playing and monetizing Flash games on the web. On the web, Heyzap has more than 1.6 million users for its social gaming platform. Now it will make it easy for those users to go mobile.

Once a user checks in, he or she can share information with friends on Facebook, Twiter and Heyzap’s own network. Right now, Heyzap wants the technology to spread fast and so isn’t monetizing the app. The company’s core business is monetizing just fine and allows Heyzap to experiment and invest in new platforms in pursuit of a larger user base, Gomila said. Once it has the user base, it will figure out how to monetize.

Heyzap’s check-in app makes it easier for apps to go viral, or to spread much faster than they otherwise might. It also allows users to establish a community on mobile phone networks. They can check in and look up the latest tips from users playing the same game, for instance. They can also make comments or win badges via social actions.

Heyzap’s software developer kit has been integrated into 20 of the biggest games on Android, including the top five game Bubble Buster, X Construction, Wheelz, Slot Machine and Plumber. It takes about five minutes for a developer to integrate the Heyzap technology into a game.

Heyzap has 17 employees and has raised $3 million from investors including Union Square Ventures. Gomila and Immad Akhund founded the company in September, 2008. Right now, there are no competing apps that show which game you’re playing. But potential rivals include start-ups such as Scoreloop, OpenFeint and DeNA’s Ngmoco.