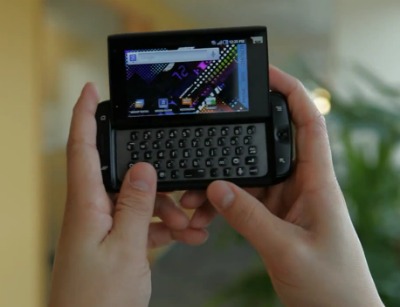 One of the most iconic elements of the original Sidekick messaging phone was its swiveling screen — which in a pre-iPhone era was enough to make Sidekick owners get noticed.

With the upcoming Sidekick 4G, T-Mobile and new Sidekick manufacturer Samsung went for something different: a “pop-tilt” hinge that slides out and reveals the phone’s keyboard with less effort than its predecessors.

You can catch a glimpse of what the Sidekick 4G’s sliding mechanism looks like below. Like the best phones featuring sliding displays, it appears as if the Sidekick 4G’s sliding mechanism is spring-loaded (sort of like how closing a BMW’s door feels better than a Honda Accord’s). That means the screen pops out with little effort and a satisfying thunk. It looks almost as seamless as the Helio Ocean, a phone that was notable in its time for its unique sliding configuration (I’ll admit, I was a big fan).

Judging from the video, it looks like the Sidekick 4G won’t be as unwieldy as previous models. That’s a good thing, because it will have to compete with superphones that are somehow managing to get thinner, even though they continue to pack in cutting-edge hardware.

T-Mobile announced earlier this week that the Sidekick 4G will be available later this spring. There aren’t any pricing details yet, but given that the Sidekick appealed mainly to teens and young adults, I expect it to be somewhere below the typical smartphone price of $200 with a contract.