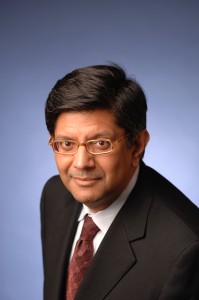 Intel said that one of its most important executives of the past decade, Anand Chandrasekher, has resigned from the company. He led the company’s efforts in creating the low-cost Atom microprocessor and in creating the Centrino mobile chip platform for laptops.

It’s not clear exactly what the shuffling means. It could be that Intel didn’t make enough headway in getting its chips into smartphones and tablets. Intel has been losing ground to rivals who make ARM-based microprocessors for mobile devices. Intel said Chandrasekher left to pursue other opportunities and his departure is not related to the performance of the group.

Chandrasekher will be replaced by Mike Bell and Dave Whalen, who will run the Atom business together under the Intel Ultra Mobility Group. David Perlmutter, executive vice president of Intel, said in a statement that Intel remains committed to the Atom business and will invest to ensure that Intel chips deliver a great user experience on smartphones and handhelds. He said a phone will ship this year with Intel chips.

Atom was considered a favorite early on as Intel collided with ARM, coming down from the PC market into smartphones while ARM grew up from feature phones. But Apple has shifted its mobile devices to its own ARM-based chips. Plus, Intel’s alliance with Nokia over the MeeGo mobile operating system doesn’t look so hot these days, as Nokia is under new management and has shifted to Microsoft’s Windows Phone 7 operating system, which can run on ARM chips. Also, ARM chips from companies such as Nvidia are now expected to run future versions of the Windows desktop software. That will likely lead to a loss of market share for Intel.

The Atom chip has done well in low-end laptops and in netbooks, but netbooks are starting to lose ground against both smartphones and tablets. Chandrasekher, a 24-year Intel veteran, was once the technical assistant to former chief executive Craig Barrett. Chandrasekher rose through the ranks and headed the mobile efforts as Intel made its big push with Centrino, which was its first effort to produce low-power microprocessors for laptops.

Nathan Brookwood, an analyst at Insight 64, said he once thought that Chandrasekher had a shot to succeed Paul Otellini as CEO. But the lack of visible progress with the Ultra Mobility Group may have stymied that chance. He said he expects Chandrasekher to emerge in a prominent role somewhere else.