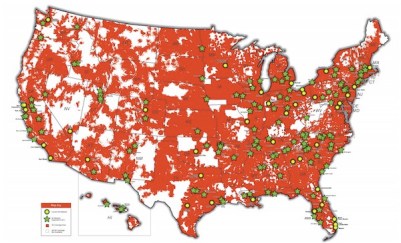 Verizon Wireless isn’t slowing down with its plan to cover America in glorious LTE 4G technology: the carrier announced today that it will bring LTE to 59 more markets, making for a grand total of “at least” 147 cities covered by the end of 2011.

The additional 59 markets, announced today at the CTIA Wireless conference in Orlando, are on top of the 49 it announced at the Consumer Electronics Show in January, and the 38 markets it launched with in December 2010 (covering 110 million people). New LTE-bound cities include Hartford, Conn., Santa Barbara, Calif., and Daytona Beach, Fla.

Verizon is relying on its swath of contiguous 700 megahertz wireless spectrum to push out its 4G network as quickly as possible. That spectrum means Verizon has the potential to cover more of the country in 4G than any other carrier.

Not too long ago, AT&T was at a major disadvantage since it only had access to 700mhz spectrum in certain areas. But if AT&T gets federal approval to buy T-Mobile, it will be able to cover 95 percent of the country in LTE.