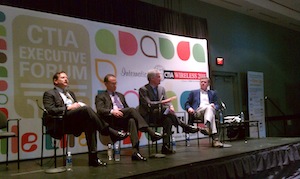 Major wireless carriers are satisfied with their current progress in evolving their networks to meet the needs of increasingly data-hungry customers, according to top executives from Sprint, AT&T and Verizon who participated in a panel at the CTIA Wireless 2011 convention in Orlando, Fla.

However, those carrier road maps will become far more difficult to navigate through into the future unless more of the wireless spectrum is made available by the FCC. Such was the consensus opinion of discussion from AT&T chief technology officer John Donovan, Verizon CTO Tony Melone and Sprint Senior Vice President of Network Bob Azzi.

“We feel pretty good about the next 3 to 5 years,” Melone said, adding that Verizon’s he road map includes the faster data speeds that utilize most but not all of the network’s resources.

Verizon, Melone said, is interested in dedicating “a slice” of their new LTE network toward broadcasting video, despite limiting it’s maximum speed capabilities.

Noticeably absent from the panel was T-Mobile CTO Neville Ray, whose company is currently in the process of being sold to AT&T.

With the roll out of LTE networks “there’s a lot to be excited about because it’s not like the one we built (before it).” Donovan said, adding that the additional spectrum available to them from the T-mobile deal will benefit customers in the end by allowing them faster wireless access and much more.

T-Mobile’s portion of the spectrum would level the playing field for AT&T against Verizon, which purchased the 700 MHz for their 4G LTE network and Sprint, whose deal with Clearwire gives customers access to the 4G network that was recently rolled out.