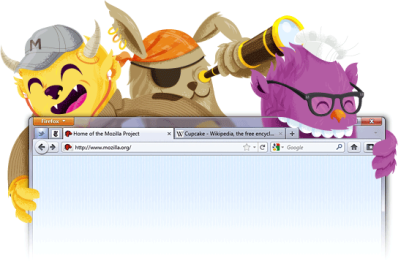 As if you needed a reminder that the next browser wars have begun, Mozilla’s Firefox 4 browser managed to double Internet Explorer 9’s first day downloads in less than 24 hours, CNet reports.

Mozilla may have been slow to upgrade Firefox, but the downloads tell us that there is still lots of interest in the browser. Firefox 4 may finally help put a stop to the browser’s declining market share, and perhaps even slow down Chrome’s steady rise.

What the numbers don’t tell us is how people intend to use the browser. Many Firefox fans have shifted over to Google’s Chrome browser over the past few years — mostly due to its crazy fast speed — so I wouldn’t be surprised if a good chunk of those early downloads came from Chrome users curious to see if Mozilla has finally turned Firefox into a legit Chrome competitor.

And as CNet notes, the numbers are far lower than Firefox 3’s 8 million first day downloads in 2008, although that was largely the result of a widespread marketing campaign. Firefox 4’s numbers are certainly impressive given that Mozilla hasn’t spent nearly as much effort marketing it.

Update: Mozilla is now saying that Firefox 4 has been downloaded 7.1 million times in its first 24 hours. Also, as a commenter noted below, it’s worth considering that much of Firefox’s success is likely due to it being available for more platforms than IE9.