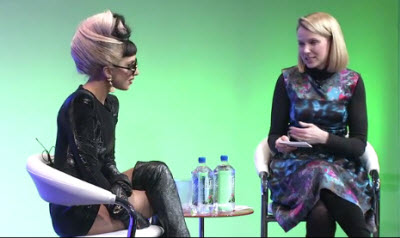 Pop singer Lady Gaga visited both Google and Twitter today, and I’ve been wondering what that means for how celebrities are feeding off of Silicon Valley and vice versa.

Lady Gaga fans find out about her through Google and watch her music on YouTube, and she tweets to communicate with them. Technology and the internet are wholly integrated into her existence.

Her interview with Google executive Marissa Mayer showed that she is very aware of the role that Google and Twitter play in amplifying her fame and her connections with fans.

Now Mayer isn’t a professional talk show interviewer and she laughs a little too much in the presence of one of her idols, but she got to choose good questions from among 54,000 submitted by fans via YouTube. I have to say that this 70-minute interview is one of the most entertaining things I’ve seen on the web, next to the Rebecca Black “Friday” video on YouTube. It actually makes me rethink the notion that quality video always has to debut first on TV. And it’s interesting to hear the perspective of a celebrity who embraces technology and innovation. Finally, the internet is living up to my expectations. 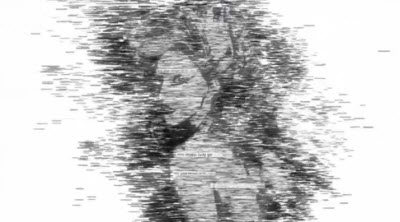 Google welcomed her with a video that illustrated her rapid rise in popularity on Google Trends and YouTube. Googlers even created an image of Lady Gaga built from words in a tag cloud (pictured), or the words that are associated with searches for Lady Gaga.

On the stage at Google headquarters in Mountain View, Calif., the conversation focused on the pop star’s outlook on her fame and her life, but it occasionally strayed into the intersection of technology and popular culture. The weirdness of the moment was underscored because most of the Google employees who asked questions were dressed in wacky costumes in honor of Gaga’s fashion taste.

There was a surreal moment when Lady Gaga said she Googles herself, as everybody does, as if she has to have Google verify that she is indeed a celebrity (Gaga said she does not feel like a superstar). There are 443 million results that come back when you Google Lady Gaga, Mayer said. And Gaga was the first artist to top 1 billion views on YouTube. 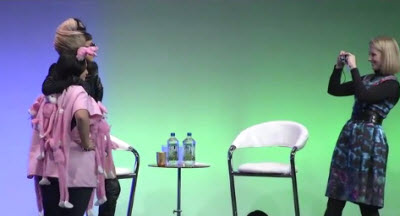 Gaga said she was told not to tweet her visit to Google. She Googled herself about the visit and didn’t find enough there (since it was supposed to be a secret) so decided to generate more buzz by tweeting her visit anyway. That ratcheted up the audience for the YouTube interview.

Gaga’s answers were both funny and profound. She talked about getting bullied, about facing who she really is, and escaping from her security guards once in a while. One questioner asked who “Stefani” is, a reference to Gaga’s real name, Stefani Germanotta. It was like asking her if she was real or not, and Gaga said, “This is me. Gaga is just a nickname.”

Gaga’s Born This Way single from her new album has been No. 1 on the charts for five weeks. But it’s interesting that her competition on the internet comes from an until-recently unknown 13-year-old, Rebecca Black, whose insipid song “Friday” has now been viewed more than 42 million times, compared to Born This Way’s 24 million views. Black’s song gained almost overnight popularity as the song people love to hate. Asked about Black and the future of fame through YouTube, Gaga  said, “I think it is fantastic. I think Rebecca Black is a genius, and anyone who is telling her she is cheesy is full of shit.” 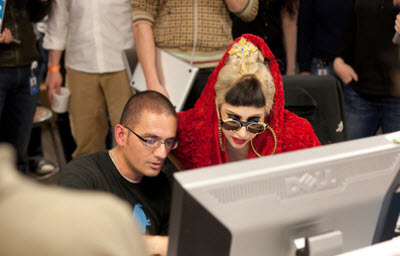 Over at Twitter, co-founder Evan Williams (@ev) also interviewed the 24-year-old Gaga and tweeted, “Just interviewed @Ladygaga at Twitter HQ. What a trip. Lovely, smart, and articulate.” In a video, an engineer showed Gaga the code generated when someone creates a tweet. She took note when the engineer mentioned Ruby code, and she took a picture of the code.

Marcus Hanson, (@mrcs) a mobile engineer at Twitter tweeted, “When @ladygaga visited Twitter HQ today, she wanted to specifically hang out with just the engineers. Take that jocks.”

Mayer asked a lot of questions, but YouTube fans were also able to chime in. Lady Gaga had some entertaining things to say. She said her entourage friends from New York know she’s on a diet and they play practical jokes like putting a stack of cheeseburgers in her dressing room.

She said that she works on a fashion idea whenever it pops into her head, even if she wants to sleep. About that, she said, “If god calls you, pick up the damn phone.” And she said about her Born This Way song that it was about identity.