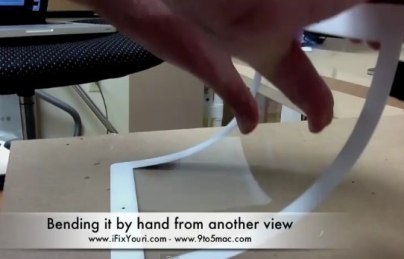 Despite what you may think, the iPad 2’s thinner glass screen doesn’t make it more fragile than the iPad 1’s. In fact, its thinness offers a level of flexibility that soundly trumps its predecessor, according to a stress test by repair site iFixyouri.

We’ll likely see other manufacturers offering ultra-thin glass screens as well. Glass is among the heaviest elements of a mobile device, so being able to move to a glass screen that’s both thinner and stronger is a coup for Apple. It’s a big contributor to the iPad 2’s thin new design.

At .62 millimeters thick, the iPad 2’s glass screen is 27 percent thinner than the iPad 1’s (which is a “hefty” .85mm in comparison), according to iFixit.

The video below shows an iFixyouri worker trying to stress the glass screens by pressing down on them with a wood block from 1-inch. He also bravely tackles the screen bending tests by hand and without any gloves. The iPad 1’s display breaks without much effort, while it takes him a while to make the iPad 2’s glass screen crack.