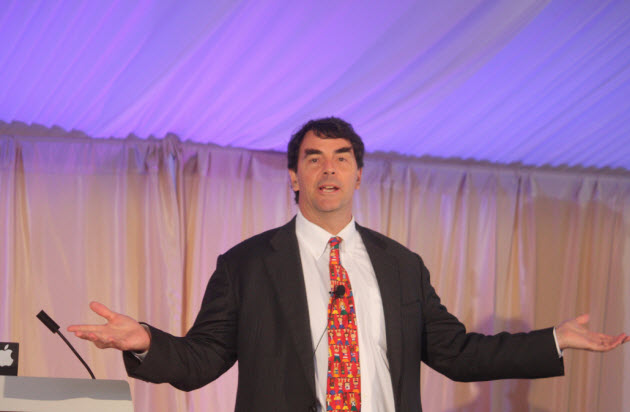 Tim Draper, the gregarious founder and managing director of venture capital firm Draper Fisher Jurvetson, says there isn’t reason to fear a big bubble in the technology sector just yet.

Draper said so during a question and answer session after his speech in a windy tent yesterday at the Global Technology Symposium in Menlo Park, Calif. The potential for a bubble is on everyone’s minds in Silicon Valley these days because a lot of people remember the froth around the dot-com days and the subsequent crash. And some fear that we are in the same boat with rising valuations for start-ups such as Groupon, Zynga, Facebook and Twitter.

“Is it a bubble? No,” Draper said. “It feels like the beginning of things coming back and we will have a good five years ahead that look very promising.”

Draper Fisher and its various affiliates have invested more than $4 billion across a portfolio of more than 400 companies. Draper serves on the boards of Glam, Meebo, ShareThis, SocialText, and others. His previous successes include Skype, eBay, Overture, Baidu, Parametric Technology, Hotmail and more. So Draper has a lot of perspective on when it’s time to party and when it’s time to quit. And of course, it’s clearly serves his interests to insist there’s no bubble. It’s worth noting that he was also very bullish during 2000 and 2001, just before the bottom fell out of the dot-com market.

He said, “We are in an interesting situation. I am seeing things happen where everyone wants to be an angel now. But it may take 15 years before a startup goes public. There are a few dynamic pieces. It used to be 5 years to 7 years before Sarbanes Oxley (tougher accounting regulations) went into effect in 2002. Now there is a new expert financial class of investor.”

He explained, “Companies are doing EPOs (actually called XPOs) instead of IPOs. The shares are sold only to qualified institutions and high net worth individuals and so it is a much freer market. There is a shorter liquidity window with xpert financial. Is there a bubble at the late stage? It is interesting that these companies (like Facebook) are getting higher multiples than if they had gone public. There is the possibility you are worth more private than public. Is there a merger bubble? A lot of mergers happen just before companies try for an IPO, since it’s the last chance to grab them. Those buyers are paying higher prices.”

Draper said that Yuri Milner, head of Russia’s DST, has been brilliant making his expert financial investments in Facebook, Zynga, and many new Y Combinator startups.

Draper said he was very excited about globalization and international investments. He traveled to lots of the emerging countries to get in early on a lot of tech companies and continues to do so. He said that 50 percent of the 10X successes — where investors make more than ten times the money they put into a startup — are overseas now.