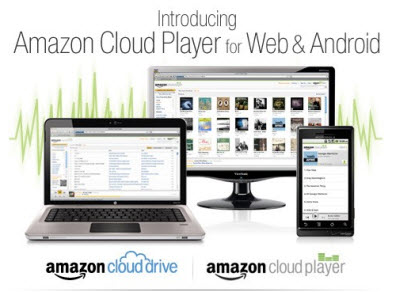 Trying to beat rivals Apple and Google to market, Amazon.com announced tonight that it is launching a cloud-based music service. The service is an important one because it raises the possibility of creating a viable challenger to Apple’s current download-based iTunes music empire.

The Seattle-based online retailer said it will offer music playback on its web site as well as from any Android device. The advantage is that you don’t have to tie your music down to a single computer (Apple allows you to spread your music collection across five computers). Since it is stored in cloud servers, or Amazon’s centralized, web-connected data centers, you can log in from anywhere and get your music.

The long-rumored cloud-based music service went live on Monday night. You can buy music from Amazon or upload your own music to the cloud from a computer using Amazon Cloud Drive, or Amazon’s own online storage.

You can play back the entire digital music collection using Amazon Cloud Player on any Mac, PC, or Android phone or Android tablet. New purchases of MP3-based music from Amazon’s store can be directly saved to the Amazon Cloud Drive for free. The service will also work with music purchased from Apple’s iTunes, (but presumably only files that do not have Apple’s digital rights management security technology).

Users can get 5 gigabytes of storage to store content for free and pay an annual fee if they want additional storage. Songs purchased from Amazon don’t count toward that storage limit. Those who buy an album from Amazon can get their free storage raised to 20 gigabytes. It’s possible that other kinds of media could be added later, but for now the service is limited to music.

“Our customers have told us they don’t want to download music to their work computers or phones because they find it hard to move music around to different devices,” said Bill Carr, Amazon’s vice president of movies and music at Amazon, in a statement. “Now, whether at work, home, or on the go, customers can buy music from Amazon MP3, store it in the cloud and play it anywhere.”

The service works with newer Internet Explorer browsers, versions 8 or 9, but not with IE6 or IE7. It also works with Safari, Firefox and Chrome. It does not work with the Opera browser.

Amazon said consumers don’t have to worry about losing their music to a hard drive crash. Files are securely stored on Amazon’s Simple Storage Service (Amazon S3) and each file is uploaded to the Amazon Cloud Drive in its original bit rate, meaning there is no loss in quality. Amazon S3 has multiple backup systems.

If you want to buy 20 gigabytes of space for a year, it costs $20 (if you don’t take advantage of Amazon’s album offer). One of the complexities for Amazon to sort out is the fact that customers of its Amazon Web Services technology (outsourced computing power) and its Amazon S3 service will likely be competing directly against Amazon itself now.