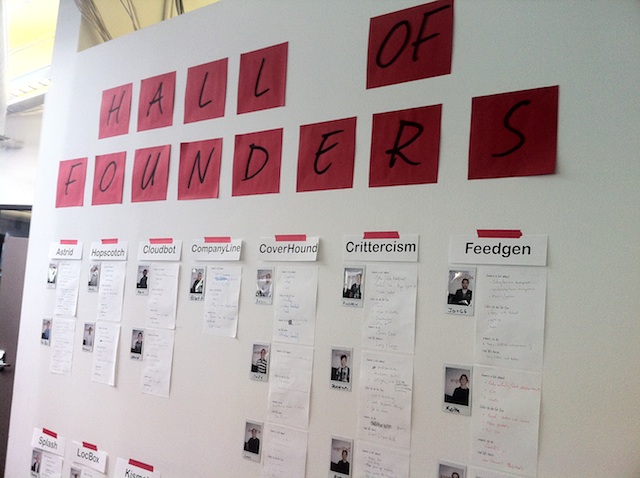 The most recent class was chosen from a pool of around 800 applicants. The last batch, AngelPad’s first class, was selected from the extended network of AngelPad’s founders.

Astrid is a mobile to-do list and reminder application for phones running Google’s mobile operating system, Android. Users can rank the importance of each task, and the application automatically prioritizes them. The application has been downloaded 1.7 million times and has picked up 20,000 five-star ratings on the Android Marketplace.

Shopobot is an online site that tracks how prices of certain products change and alerts users when the price falls beneath a certain level. The site focuses on big-ticket items that consumers usually consider before making a purchase. Shopobot searches social networks for experts in the area a consumer is shopping in, picking up recommendations from friends rather than unknown experts. Its founders come from Microsoft and online retail site Amazon.com.

Hopscotch is a mobile app that uses QR codes — two-dimensional bar-codes that anyone can scan with a phone — and links to more related media. Hopscotch users can, for example, scan a QR code on a concert advertisement poster and find out which friends are going and listen to music videos. Businesses like Live Nation, which runs concerts, can attach QR codes to their ads and pick up information about the smartphone users who scan the codes.

Kismet is a mobile dating application that uses real identities, photos and locations to match potential couples. The site focuses on using photos more than large amounts of text such as other dating sites like OKCupid. The app is built on Facebook Connect to validate an identity, but users can remain anonymous through the application until they are ready to reveal their identities. It uses Foursquare and other location-based services to keep track of a user’s activity.

Splash is a single line of code that adds a tab to mobile games that checks which friends are playing that same game. Mobile app users can also share achievements and ask for help within each game within that same tab. The application also gives information about Splash users back to developers that add the application to their mobile games. Michael Powers, a founder of Splash, was the first employee at Slide.

LocBox is an iPad application that customers check into with a name and e-mail as soon as they enter a store. Customers that check in get a “deal” similar to those Groupon and Foursquare users typically get. Store owners are then able to acquire data about potential customers. LocBox is then able to push out additional deals through Facebook and other social networks to bring those same customers back again.

CompanyLine is an enterprise-style social network that lets employees communicate amongst themselves. Whenever they publish a status update, the application picks up on key words that launch external applications like WebEx or download files from a Dropbox account.

Feedgen is a simple web-based application that prioritizes marketing leads in an e-mail-like interface. Any lead that is missing any information automatically tries to grab missing information from other social networking sites. The more leads and activity a Feedgen user participates in, the smarter the application gets about prioritizing certain leads over others.

Coverhound is a web-based application that has consumers put in a little bit of simple information like name and email address. The application then uses third-party applications to gather a lot of information about the consumer’s credit history and income. Coverhound then ships that information off to insurance companies and pulls in insurance rate quotes.

Secondleap personalizes the process of changing careers. The site asks a few questions to determine whether the new career is a good fit for that individual. The application then recommends schools and gives examples of ways to finance the path to a new career. The recommendations are proximity-based and are organized by how expensive they are.