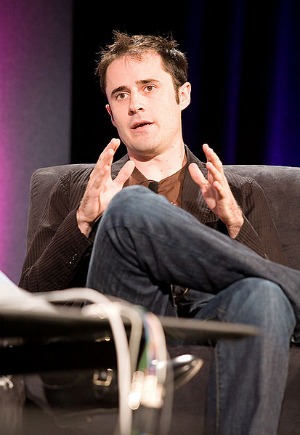 Ev Williams, the cofounder of microblogging service Twitter, who stepped down as CEO last fall to make way for former COO Dick Costolo, said in a blog post today he is barely engaged in running the company and is focusing on a new, unnamed startup venture.

Williams (pictured) said that he has essentially handed over all control of the company to Costolo, who he says he has no doubt will make Twitter “bigger and better.”

The departure will also be freeing him up to work on new ideas — which begs the question, what could be even “bigger and better” than Twitter?

He did not outline what that project will be, only that it has now captured the majority of his attention.

So what’s next for the one of the “cool kids” of Silicon Valley?

Well, Williams said he initially left Blogger, which was acquired by Google, when it seemed like it was “on solid ground and in capable hands.”

Now that he feels Twitter is just as healthy, he admitted his mind had “started to wander” after Costolo took over.

Williams made it clear, however, that he won’t be a stranger at Twitter anytime soon.

First of all, I’m not disappearing from Twitter. I remain on the board of directors and will frequently meet with many folks there to help in any way I can.

However, now that Twitter is in capable hands that aren’t mine, it’s time to pick up a whiteboard marker and think fresh. There are other problems/opportunities in the world that need attention, and there are other individuals I’d love to get the opportunity to work with and learn from. (Details to come.)

While I doubt I’ll get so lucky a third time, as my good friend Biz Stone likes to say, “Creativity is a renewable resource.” Let’s see what happens.

Yesterday, Twitter announced that co-founder Jack Dorsey had returned to the company to lead its product efforts, and it basically admitted that Williams was no longer involved on a day-to-day basis.

There’s supposedly a lot of tension between the pair, because Williams and the board basically pushed Dorsey out so Williams could take over as CEO, and it seemed like Costolo was bringing back Dorsey at Williams’ expense.

The news also comes a week after Internet behemoth AOL announced that it had hired Stone, another founder of Twitter, as a “social impact advisor.”

Stone is currently creative director at Twitter, where he oversees new product development, vets and proposes fresh ideas for the five-year-old start-up, and just generally functions as“the voice of the company and brand.”