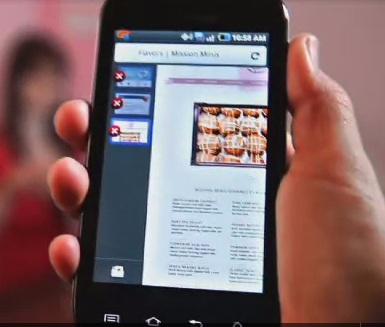 The browser brings features like Firefox Sync — which synchronizes tabs, personal data, and settings from Firefox 4 on any other platform — and a new interface that does away with distracting menus and icons. And of course, it’s also blazing fast.

Firefox 4 for Android shows just how innovative apps can be with an open mobile OS like Android. Apple’s iPhone OS doesn’t allow for any third-party browsers to use rendering engines of their own, which means that it would be impossible for Mozilla to release the browser on the iPhone as it is. Undoubtedly, Firefox 4 is one of the few Android apps that will inspire envy among iPhone users.

Mozilla does offer an iPhone app, Firefox Home, which includes the Firefox sync feature. But it relies on Apple’s WebKit browser rendering engine, which means that in practice it isn’t that much different from the iPhone’s native Safari browser.

One aspect of the mobile Firefox 4 that I really appreciate is its ingenious user interface that lets webpages fill the entire screen. To access open tabs, you simply swipe right on your device’s screen. To access settings, swipe left. The address bar is at the top of the screen, natch, but it also disappears as you scroll down a page. On mobile devices, where screen real estate is precious, I appreciated Mozilla’s concerted effort to make as much of the screen available as possible.

Mozilla claims that Firefox 4 is up to three times faster than Android’s built-in browser. After testing the browser on a Samsung Galaxy Tab, the speed difference was noticeable. Mozilla even managed to include extensions support in the browser, which the desktop version of Firefox popularized.

Firefox 4 also brings support for advanced HTML5, which will allow Web publishers to implement features like location-aware browsing (using your device’s GPS), device orientation (which would allow sites to show you different content based on how you’re holding your device), and even build games completely out of HTML.

The browser doesn’t include support for Adobe Flash at the moment — which is the biggest knock against it, since Flash support is one of Android’s big selling points. Mozilla says it’s looking to add Flash in the future, it just wasn’t fast enough to include in time for Firefox 4’s launch.

For some reason, Mozilla is also releasing Firefox 4 on Nokia’s Maemo platform today, an operating system that’s only available on Nokia’s N900 smartphone.