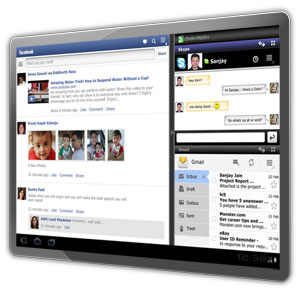 Tired of Android tablets that all look the same? Cornerstone, an upcoming Android tablet profile from mobile solutions company Onskreen, aims to fix that by offering tablet makers a unique multi-tasking interface.

You can see Cornerstone in action in the video demonstration below. In a nutshell, it offers an interface that lets you juggle multiple mobile apps at the same time — for example, you can browse the web, chat, and check your email at the same time. It opens up the possibilities of large tablet screens, which always seem restricted by operating systems that only focus on one app at a time. Even with Apple’s multitasking iOS 4.0 update, the iPad still doesn’t juggle multiple apps in a way that naturally fits into my workflow.

For tablet makers, Cornerstone offers a unique layer on top of Android that will help their tablets appear different from the competition. And for users, it will mean they’ll have access to better multi-tasking capabilities on Android long before the release of Android 3.0, which was just recently delayed for smaller developers. Onskreen says that Cornerstone will be easily upgraded to support Honeycomb when it’s released.

The company plans to release a beta version of Cornerstone in four weeks.

Seattle, Washington-based Onskreen has been around for six years and also offers mobile analytics and an app store. The company says it’s profitable and bootstrapped itself to success.