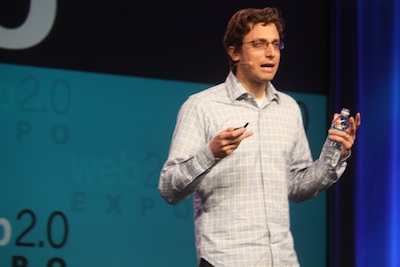 Jonah Peretti, who co-founded both the Huffington Post and BuzzFeed, has spent a lot of time thinking about what makes content go viral. Today, he shared some lessons on-stage at the Web 2.0 Expo in San Francisco — and in the process, offered some thoughts on the difference between how Google and Facebook look at the world.

One of the key things to understand, Peretti said, is that “content spreads for different reasons on different platforms.” Google’s search engine is built around information. Sites like About.com are perfectly optimized for Google, because they’re “knowledge-centric” and “keyword-centric”.

As an example, Peretti talked about a funny photograph of two basset hounds running that was posted on BuzzFeed. There’s no useful information in the photo, so from the perspective of Google, it has very little value. Yet the photo has received more than 45,000 Facebook “likes”.

In other words, he said, publishers who want their content to go viral need to stop thinking about it as “information to get into people’s heads” and more as “an excuse for social action”.

“This is something Google struggles to understand with their content initiatives,” Peretti said. (It will be interesting if Google’s new social effort, +1, bucks this trend.)

He also talked a bit about how these ideas have influenced BuzzFeed, which operates a site for viral content and also offers tools for publishers to measure viral lift. The company has really focused on viral lift as the new measure of success, rather than straight pageviews, Peretti said. And it takes the social idea even further in a redesign that he previewed today. Instead of dividing the content into traditional topic areas like “politics” and “sports”, it’s divided by users’ reactions: “LOL”, “OMG”, “Fail”, and so on.