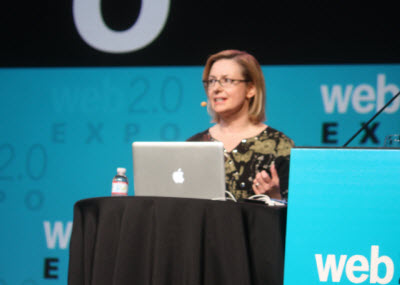 Measuring emotions isn’t as hard as it sounds.

Researchers have shown they can use technologies to measure your emotional state of mind for market research, educational, and medical purposes. The technology could ultimately become part of a larger set of tracking tools that will help companies tailor products and services more precisely to people they’re targeting.

Rosalind Picard, a researcher at the Massachusetts Institute of Technology’s Affective Computing Research Group, gave a speech at the Web 2.0 Expo show in San Francisco yesterday where she spelled out how it’s possible to capture someone’s vital stats in real time to decipher his or her emotional state.

Picard and her researchers have figured out a number of ways to measure emotions, including putting palm sensors on volunteer subjects. The data can be put on a graph that can show off their emotional peaks and valleys; the researchers can get an exact match for the peaks and valleys by looking at a video that is synchronized with the graph. 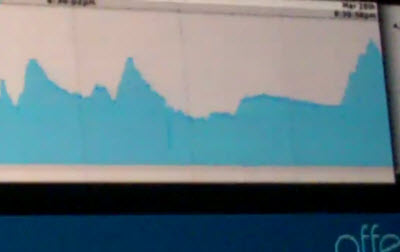 Picard, who is also chief scientist and chairman of Affectiva, a startup that works with market researchers to measure consumer reactions, said the research is meant to help discern the emotions of people who can’t communicate them well, such as people with autism or language disabilities.

Picard showed video of a girl with a sensor that measures her skin conductivity, which records sweat levels and can be correlated to stress. The video shows that the girl’s stress levels go up when she gets on a swing and then subsides the more she gently rocks on the swing.

Sensors can give warnings about babies who are about to cry as well (although you have to make sure that the baby doesn’t eat the sensor). 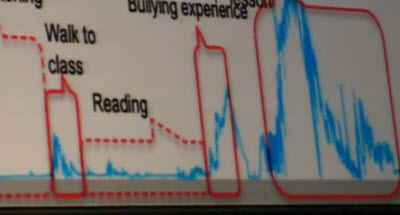 Picard also showed a girl during a recital day at elementary school. The stress of performing a recital is clearly visible on a graph measuring the girl’s emotions. She relaxes for a while, but her stress level goes up when the girl suffers a bullying experience from another student.

Picard also showed how market researchers can make use of the technology by gauging the emotional reaction of an audience for a commercial or a movie. Of course, there are lots of privacy concerns here, so the technology has to be used with the consent of the user.

A webcam can also show how much somebody smiles while watching something. This link lets you analyze your smile as you watch a commercial in front of a webcam.