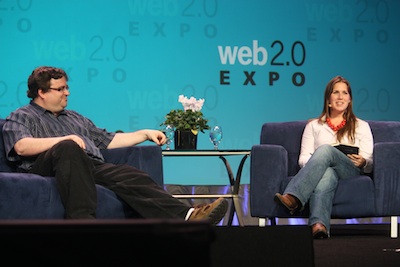 LinkedIn founder and venture capitalist Reid Hoffman talked about his vision for Web 3.0 today at, uh, the Web 2.0 Expo in San Francisco.

AllThingsDigital’s Liz Gannes, who was interviewing Hoffman on-stage, asked him whether he’s putting his money where his mouth is. Specifically, Hoffman is now a partner at Greylock Partners — so are his investments moving into Web 3.0 and building features that take advantage of this social data?

Hoffman answered that if they’re not doing it yet, they will soon. For example, he said that right now his investment Airbnb doesn’t really have a significant data piece — it’s just a marketplace for short-term rentals. However, Hoffman said, “I’m sure there are really interesting data patterns” around users and what they like to rent, and Airbnb will probably look at those patterns in the future.

Hoffman covered many of the same points he made in his speech at the South by Southwest conference two weeks ago, but he also elaborated on his ideas. In his previous talk, he warned companies looking to collect social data not to ambush their users, and he said they need to distinguish between data that users will willingly share and other data that’s more sensitive. Today, he added another tip: Only ask for the data when you actually have a value proposition for the user. For example, he said that LinkedIn as a company would probably benefit from asking users about their gender, but it can’t provide anything useful in return, so it doesn’t ask.