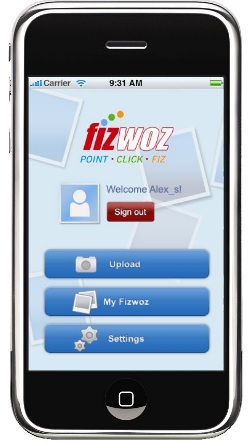 Those seemingly boring pictures and videos on your cellphone from concerts and sporting events may be worth something to media buyers — or at least, that’s the premise San Francisco-based Fizwoz is running with.

The company may be on to something. Since its launch at the end of January 2010, Fizwoz has landed 78,000 users from 161 countries who upload their cellphone media to the site in hopes of earning some cash. And it’s growing steadily — Fizwoz tells me that it’s adding between 300 and 500 new users every day.

It’s practically impossible to buy a cellphone without a camera these days, even in many international markets. It’s also clear that cellphone photo sharing is one of the most exciting areas in the mobile arena at the moment — just look at the success of Instagram and Color’s massive $41 million in funding. Fizwoz represents the next logical step for cellphone media — instead of sharing photos and video on the web for free, you can make a quick buck by licensing them to media companies.

CEO Andy Sheldon tells me the company has paid out $18,000 since its first sale in June 2010. Typical sales can be between $5 and $500 (I assume mostly on the lower end of that spectrum). Sheldon says it’s only a matter of time before someone manages to sell their media for six figures.

Strangely enough, it was a tragedy that inspired Sheldon to create Fizwoz with co-founder Ian Smith. He was fascinated by how many media organizations were relying on cellphone video shot by amateurs during the Mumbai terrorist attacks in 2008. With cellphone cameras getting steadily better, he figured the opportunity was ripe to create a way for media companies to get access to amateur cellphone media.

Sheldon says that over 70 percent of Fizwoz users are outside of the US — primarily because of the service’s support for Nokia phones (which are also generally known for their high-quality cameras). The company has also made iPhone, Android and BlackBerry apps available. They’ve also recently added support for multiple languages, including Spanish, French, German and simplified Chinese.

Fizwoz has raised $400,000 in angel funding and is currently seeking first round investors.