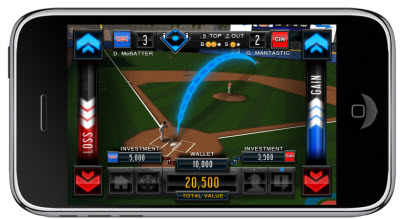 Baseball fans will be happy couch potatoes today with the opening day of Major League Baseball. But for fans who get fidgety in between the action, a startup called Game Time Live Sports Services has created a social online game GameSlam that lets you bet what will happen next in the real baseball game. If it works, the young company could unlock a lucrative audience for interactive television.

The Highland Park, Ill.-based company is announcing GameSlam today in public beta form for fans who want to bet against their friends (with virtual currency, not real money) and predict what’s going to happen next in the play-by-play.

“It lets you do something during the game so it’s no longer a passive experience,” said Kenny Mazursky (pictured below, left), chief marketing officer of the company, in an interview. 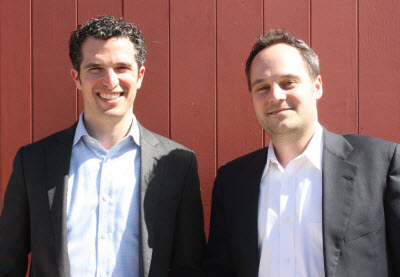 In an online arena of 100 fans, users get 10,000 points to bet during a real-time (live) baseball broadcast. The fans could wager 100 points that the next pitch will be a strike or a ball. Or they could make a bet about whether a team will score a run in the inning. Or they could make a wager about who will win the game. As the game proceeds, they are awarded points for staying with the game. If they bet everything and lose it, they can still stay in the action by earning new points gradually.

You can play the free-to-play game on an iPhone in a sports bar or on a laptop in your living room accessing Facebook or a web site. The game works on Apple’s iOS devices, Android, Macs, PCs web sites, and Facebook. For no charge, you can play with 100 random people or invite a group of friends into a big room. If you want to have a private experience with only your friends, you have to pay extra.

The company says there are more than 80 million baseball fans watching games on TV. But only about 30 million are serious enough to join fantasy baseball leagues, where they painstakingly keep track of players and scores. With GameSlam, getting into a game is easy. And since you don’t have to bet on every single pitch, it’s not as stressful as real-time fantasy sports games.

As fans watch TV, they check stats online, play an app, or update their status on TV. But they’re not doing something that is completely tied into the action on the screen. GameSlam basically channels your otherwise distracted attention right back into the game, said David Domm (pictured right), co-founder and chief operating officer/chief financial officer, in an interview.

GameSlam immediately updates the score of the game and the outcome of your bets. It also shows a 3D animation of what happened with the play in real time. That animation isn’t extremely realistic; it doesn’t for instance, have the likenesses of the players. But it will show you what happened and where a ball was hit.

Over time, GameSlam will start tournaments and give players rewards for winning the most points, said Kenny Mazursky, who co-founded the company with his father Rick Mazursky (chief executive) last year. The Mazurskys came up with the idea as they were discussing the popularity of fantasy sports and how that didn’t jibe with the fact that sports fans can’t interact during game time, which is the most exciting time to play.

The game has chat functions, league creation, check-in, head-to-head challenges and other features. The 3D animation uses the Unity 3D engine so that the company can create versions of the game that run on multiple platforms. The real-time game stats come from Stats LLC, which delivers the stats instantaneously, roughly in time with the slightly delayed cable broadcasts. The goal is to offer fans a console-like game experience.

Game Time Live Sports Services has 20 employees and has raised $5 million. Rivals include Thump and Pre Play Sports. Kenny Mazursky said the company is talking to a number of large broadcast networks and leagues about possible partnerships. Rick Mazursky is a seasoned entrepreneur with leadership positions at companies such as Vtech, Digital Innovations, G.P. Toys, and PDQ Mazoo and a board position with Leap Frog Enterprises. Kenny Mazursky is a 13-year veteran of internet marketing companies such as Rollingstone.com, Ignite Sports Media, and Down to Earth Marketing.