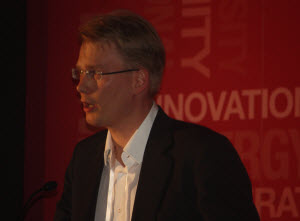 Three startups came out on top today in a bake-off at the Plug and Play International Expo event in Sunnyvale, where companies gave 2-minute pitches to a crowd of investors and entrepreneurs.

If there was a theme today among the 34 international startups that made the elevator pitches, it was that e-commerce is hot. In particular, a number of the startups focused on shopping, apps, and payments.

The first place winner was Accedo, second was TapMap and third was Super Compare It.

Accedo provides apps and an app store for connected televisions and internet protocol TV (IPTV). These are apps users can access while watching TV. Based in Stockholm, Sweden, Accedo was founded in 2004 and has shown consistent growth since 2007 and profitability since 2009. Accedo provides app stores in more than 30 countries to TV platform owners such as LG, Panasonic, and Philips. It also provides app stores to Deutsche Telekom, PCCW, Telstra, Viacom, NBC Universal and Time Warner. 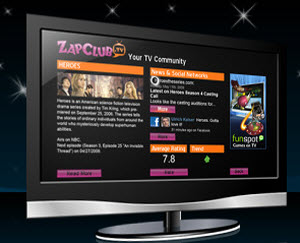 But the market is in its early stages and is fragmented across incompatible platforms. It is costly for service providers and media companies to roll out an app across all of those different platforms. So Accedo does that for them. Its business includes making and licensing its own apps as well as distributing them through an app store. Michael Lantz, chief executive (pictured at top) said the company is raising about $10 million in order to expand worldwide. 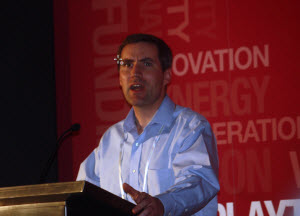 TapMap of Galway, Ireland, helps physical retailers sell more products by publishing the retailers’ real-time in-stock inventory list on a variety of web-enabled devices. This lets consumers know if a product they want is in stock at the moment when they’re shopping for it.

Philip McNamara (pictured left), chief executive of TapMap, said the company doesn’t scrape data. It gets it directly from a retailer’s electronic inventory system in real-time. Right now, it displays that inventory for consumers. In the future, it will provide demand analysis trends and forecasts for retailers.

TapMap makes money from retailers, marketing agencies, and ad agencies. It charges them a fee to access analytics on live product demand. The market potential is big, since TapMap reduces the need for advertising. And retailers spend $60 billion on advertising in the U.S. alone. Partners include Wal-Mart, PC World, Microsoft, Oracle and others. The data gets published through partnership with app developers such as Red Laser and Shop Savvy. The company is raising $1.5 million. 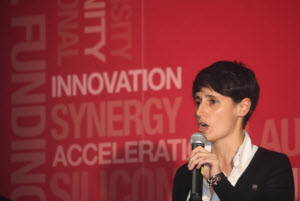 Super Compare It compares grocery store prices and tells you where to shop, both online and offline. The aim is to save consumers time and money and help retailers and brands check their local competitors’ prices and consumers’ behavior in real time. In Italy, the company snagged more than 20,000 users in three months. It can now compare prices for 37 national retailers, or 70 percent of the grocery market, and it has a database of more than 1 million records.

The company is looking for $500,000 in funding to build a functioning web site and hire developers. The San Francisco company with Italian roots is headed by Barbara Labate (pictured right) and her partner Zion Nahum.

The Plug and Play Tech Center incubates startups in its Sunnyvale headquarters and various satellite locations. Its mission is to immerse startups in entrepreneurial culture and accelerate them by giving them space and access to other entrepreneurs, venture capitalists, angel investors and high-tech executives. There are more than 300 startups in the Plug and Play Tech Center’s buildings (that’s 50 more startups overall than we counted last August). About 60 of them are international companies that were founded elsewhere.

The international focus started a few years ago, amid the onset of the recession. It was a way to fill space in the buildings, but it was also a way of going full circle for Saeed Amidi, chief executive of the Plug and Play Tech Center. Amidi is an immigrant himself who moved to Silicon Valley from Iran in 1979, after the Iranian Revolution. His family started a Persian rug store in Palo Alto, Calif., and then moved into real estate.

Plug and Play has partnered with 160 institutional venture capital firms, 50 corporate venture arms, 300 angels, and a number of foreign governments. Since its founding in 2006, companies in the Plug and Play centers have raised more than $750 million in funding.

Also noteworthy today is Plug and Play opened its first startup accelerator for the Egyptian market. The accelerator will focus on fostering Egypt’s next generation of tech startups with events and other ecosystem assistance.