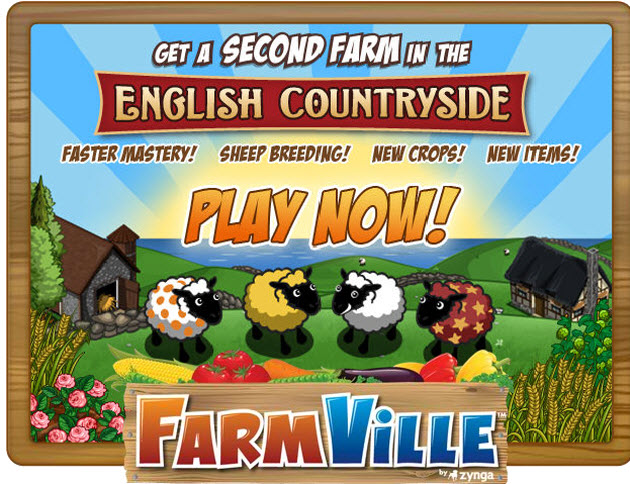 Social game maker Zynga is rolling out the first major expansion for its uber-popular FarmVille game, which debuted back in June 2009 and has been played by hundreds of millions of Facebook users.

We reported last month that Farmville was preparing the expansion, called FarmVille English Countryside, and it finally started rolling out to fans tonight. 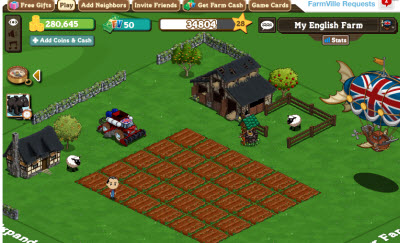 (At least I received my first invitations from friends tonight). Zynga typically rolls out its new games slowly to make sure everything is working right before it begins heavily promoting the game.

This expansion is the biggest single change that Zynga has made to FarmVille. If Zynga gets this right, it could return FarmVille to its glory as the game with the biggest and most profitable audience in the world.

After I accepted my invite, I landed in a farm that was in need of repair. As soon as I restored some crops, I was asked to send passports to my friends so they could join as well. Then I was asked to customize my farmer (and was given an opportunity to purchase a variety of clothes with Facebook Credits). Then I returned to fixing up my farm. The more I send messages to friends, the faster I can fix the farm and move on to the English Countryside expansion. Zynga certainly knows how to make its games spread like lightning. 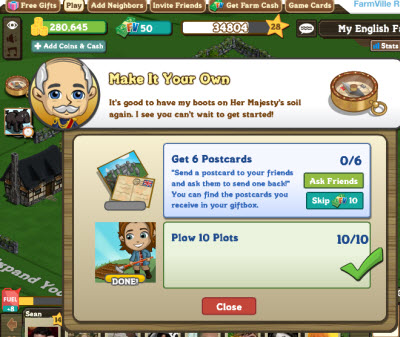 A central character to the expansion, “The Duke,” has given me some missions, such as writing post cards to friends. (The game crashed once while I was sending cards).

I’m looking forward to meeting some English sheep. If there’s a big deal in this game expansion, it’s the sheep. Yes, while the original FarmVille lets you breed horses, in this game, you will be able to breed sheep. You can combine sheep of different colors and you’ll never guess what the resulting color will be for the baby lambs. Todd Arnold, general manager of FarmVille, told me in an earlier interview that this is an “innovative feature” of the game. I call it a mini-game.

For most hardcore gamers, such puffery in the form of breeding sheep is what they hate about FarmVille, which drew considerable criticism as a farming simulation because it didn’t have much game play. But casual players loved it, and the game hit a peak of 83 million players in March, 2010. FarmVille is one of the most successful games in history, surpassed only by Zynga’s CityVille, which got as large as 100 million players. Mark Pincus, chief executive of Zynga, owes his billionaire status to the success of FarmVille.

FarmVille became the talk of the industry because it proved that traditional game companies that focused on hardcore gamers weren’t thinking big enough; it took a scrappy startup like Zynga to imagine and create FarmVille and market the hell out of it to a receptive audience of older women. (Although maybe “imagine” isn’t the right word, since the inspiration for the game came from earlier games such as Farm Town, Chinese farm games that came before that, and the original farm game, Harvest Moon on the Nintendo DS).

FarmVille has been in a steady decline as Zynga focused on launching other games such as FrontierVille and CityVille. The game now has 47 million monthly active users and 13 million daily active users. The decline was so steep that writer Peter Yared insisted that Zynga had better launch FarmVille 2.

In FarmVille English Countryside, Zynga has added more story and more game play to address not the critics, Arnold said, but feedback from fans who wanted more things to do than raise crops. At the beginning of the new expansion, you meet the Duke, who flies in on an airship with a British flag on it. You have to repair the Duke’s airship and then his farm. Then you have to invite some Facebook friends to a bon voyage party (yes, that’s Zynga’s not-so-subtle way to make the game viral). After that, you can fly in his airship to England.

There, you can start farming your own plot with all-new crops, equipment, buildings and decorations based on an English theme. But Arnold said that the good thing about FarmVille English Countryside is that it does not force fans of the current game to start over. All of your FarmVille coins and cash, your gift box, farm size and your level of achievement can transfer over to the English Countryside game. (I can see that my coins and my achievement level are updated).