Helsinki-based Rovio is riding high on the success of the game, which it wants to parlay into a multi-year franchise. The game’s momentum has made it one of the fastest growing brands in video game history, and Angry Birds Rio is key to keeping that enthusiasm going. 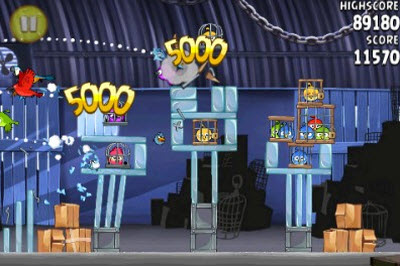 In Angry Birds, players use the touchscreen of the iPhone or Android smartphone to slingshot cute Angry Bird characters at evil green pigs, who have stolen the birds’ eggs. Destroying the birds fortresses with the birds gets harder and harder as the physics of the attacks becomes more complicated.

The Angry Birds Rio game is a new version that includes characters from Rio, the animated movie that debuts on April 15. The movie tie-in should help boost the awareness of Angry Birds even higher. Google Trends shows that Angry Birds is more popular as a search term than CityVille, FarmVille or Mickey Mouse.

Rovio didn’t provide a breakdown between paid and free versions. The Angry Birds Rio for Android game debuted exclusively on the Amazon Appstore on March 14.