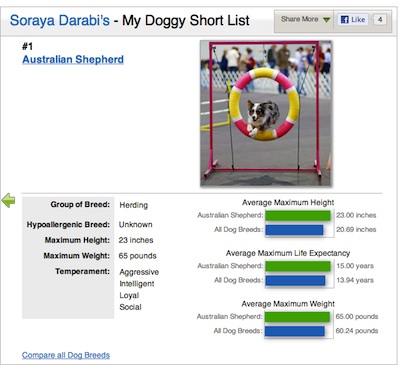 When I last talked to Kevin O’Connor, who sold his online ad company DoubleClick to Google for $3.1 billion, he was trying to expand his new startup FindTheBest by adding as many “comparison apps” as possible. Now, FindTheBest is also experimenting with new ways to show off all its data.

The Santa Barbara, Calif. company’s goal is to become the definitive destination for finding the information you need to make choices, whether it’s buying a smartphone or choosing a school. The site’s data is arranged into charts (aka comparison apps) showing the relevant facts about each item. And if you find the charts a bit overwhelming, the site has added other ways to compare products.

For example, FindTheBest just announced a new feature that lets you build slideshows ranking items on the site. To help attract some attention for the feature, it asked some well-known figures in the tech world to contribute. So you can see the best motorcycles as selected by Randy Komisar, who is a member of the company’s board and a partner at FindTheBest investor Kleiner Perkins Caufield & Byers. Or you can check out Foodspotting cofounder Soraya Darabi’s favorite dogs.

FindTheBest has also added a question-and-answer feature. O’Connor told me that the company doesn’t “fashion ourselves to be a Q&A site.” But FindTheBest contains the answers to many of the questions people ask on sites like Google. By adding questions like “Which ski resort gets the most snow?” FindTheBest can make those answers more visible to search engines.

As for where the site goes from here, O’Connor said he wants to focus on making the service more social. FindTheBest raised money from Kleiner’s sFund for social networking startups but, as yet, has relatively few social features. O’Connor said the challenges is to balance user input and social features with FindTheBest’s need for reliable data. (The company’s information is mostly compiled by its employees. Businesses can also submit data, but FindTheBest verifies submissions before posting.)

O’Connor also revealed that he owns the FindTheWorst.com Web domain, so that could be another way to expand.