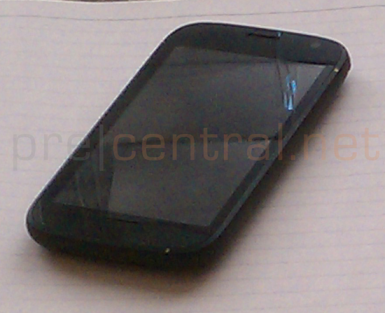 A keyboard-less phone — similar in form factor to the iPhone and HTC EVO — running Palm’s WebOS mobile operating system has been spotted in the wild, according to precentral.net.

The phone looks like it is about as big as the Pre 3, the latest version of the Pre lineup that features Palm’s WebOS software. Hewlett-Packard has taken over developing and manufacturing the Pre lineup after it announced it would buy palm for $1.2 billion. The company unveiled a new lineup of smartphones — the Veer and the Pre 3 — along with a WebOS powered tablet. But a phone packing a form-factor similar to the iPhone and lacking a keyboard was absent from the launch.

Research in Motion, Apple and Google all feature phones that carry that form factor — all of which have been pretty successful. Palm has always chosen to have a slide-out or a vertical keyboard on its phones — which takes away some screen real estate and doesn’t necessarily meet the market demand for a touchscreen keyboard. If the Stingray, the codename for a keyboard-less WebOS, is real, then HP is looking to directly compete with the rest of the market in that form factor.

HP’s acquisition of Palm followed a relatively weak launch of its Pre and Pixi devices. During a conference call discussing the acquisition, HP executives emphasized that the deal to acquire smartphone maker Palm was about more than phones. The copany clearly had much higher aspirations for the mobile operating system. HP has plans to get consumers to buy multiple WebOS devices by creating multiple ways to synchronize data across the software.

Each WebOS-powered device can synchronize with other WebOS devices using HP’s Touchstone software. That means if a user receives a text message on their phone, they can see the message on other WebOS-enabled devices — and share a number of other apps. Users can, for example, touch a TouchPad with a Pre 3 phone and transfer whatever is on the screen on the TouchPad to the Pre 3.