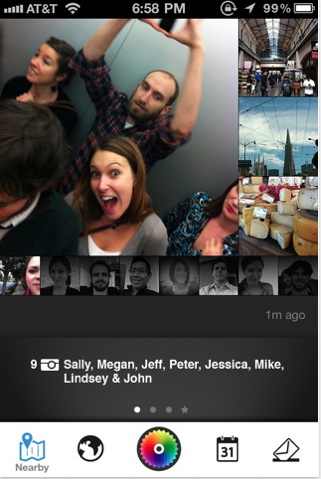 There’s no shortage of folks who weren’t particularly impressed by the launch of social smartphone application Color a couple of weeks ago. Looks like you can add Boris Bogatin, chief executive and founder of “disposable social network” LoKast, to the list.

Bogatin just published a long blog post outlining his reaction to Color. On one level, his response isn’t surprising — Color and LoKast are, on a conceptual level at least, competitors. Both apps offer ways to share media with people nearby, and Color has even used language that’s similar to LoKast’s, calling itself an “elastic network.”

On the other hand, the post (and a phone conversation that I had with Bogatin about his views) declares that LoKast won’t just give up in the face of better-funded competition (Color has raised $41 million, LoKast’s parent company NearVerse has raised a little more than $1 million) and outlines why Bogatin still thinks he has a fighting chance.

So what’s his opinion of Color? Color’s executives talk about all the time and money they’re putting into their technology, but Bogatin said that technology is also “within the platform of patents and technology that we’ve been building for the last few years, so we don’t see it differentiating them in the long run.”

Secondly, Bogatin said it is “essential” for proximity-based social interactions to be real-time and synchronous. Color, he said, will remain “niche” because it doesn’t emphasize real-time sharing. Do you really want to “look at the photos of 20 randoms, that passed through a local coffee shop over the past 10 days”? Bogatin says he might, “but I’ll do that for about 15-30 seconds and then get bored.”

Color has also talked about its ability to decide on-the-fly who your relevant connections are, rather than asking users to manually connect with each of their friends. Bogatin predicted that Color will “spend a lot of money in this area and fall short,” because the idea of perfectly understanding someone’s social context is “absurd.” Instead, Bogatin said, location-based apps need to follow Foursquare and ShopKick’s example: “You present the most relevant information in that physical setting and let the person choose.”

Lastly, Bogatin looks at Color from a distribution standpoint and argues that the “horizontal marketing” approach isn’t going to work — if users just sign up and use the app on their own, it’s unlikely that they’ll have a good experience, because you won’t get enough users nearby for real-time interaction. Instead, you need partners who are going to help distribute and encourage usage of the app.

So does he think LoKast has all the answers? Not exactly. Bogatin praises media-sharing app Bump and mobile chat app Yobongo for their success, and he acknowledges that LoKast has made some mistakes. For example, it started out by trying to partner with musicians, who could use LoKast to distribute songs to fans at concerts. Apparently, that didn’t work out, and LoKast is refocusing on a new strategy (which is still secret for now).

I’ve emailed Color to see if it wants to respond, but I haven’t heard back (I’ll update if I do). It’s also interesting to compare Bogatin’s critiques to a recent post from TechCrunch’s MG Siegler, who used Color during a trip to Mexico for a bachelor party. Thanks in part to the improved interface unveiled last week, MG concluded: “A funny thing happens when you actually use the app in the way that it’s intended: it works really well,” creating “a sorta living, breathing photo album.”

In a way, MG gets at the same problem that Bogatin brought up: For now, Color is only useful in a fairly specific social setting. I suspect that if Color is going to live up to the hype and become the future of social networking on your phone, it has to become a lot more broadly useful.