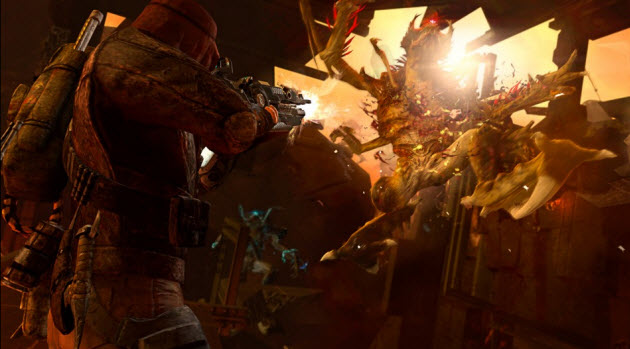 THQ has pulled out the stops on its “transmedia” strategy, where it coordinates media related to its big games. That strategy will hit a high point around late May when the SyFy channel airs its Red Faction Origins film and THQ launches its Red Faction Armageddon video game. 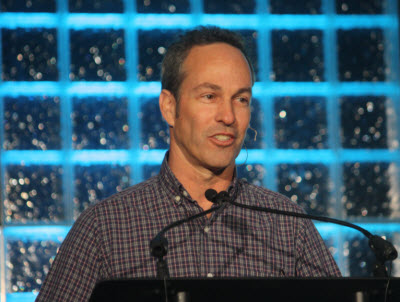 Danny Bilson, a 20-year film writer who is now the head of marketing and development at THQ, is one of the architects of that strategy. In a speech and subsequent interview yesterday at the MI6 game marketing conference, Bilson said that transmedia deals like the SyFy one are a great way to extend awareness of a game brand and help with overall sales. They’re also a way for game makers to concentrate their biggest bets on a single title rather than spread time and attention across a bunch of games.

“It’s symbiotic,” Bilson said. “SyFy wants to be associated with games. They need games to market their movies. We get two hours of TV time. This is a complete transmedia partnership.”

With transmedia (or the use of one story or intellectual property across multiple media), hits can turn out to be much more amplified than stand-alone game launches, but the duds also leave a bigger crater. Each transmedia property becomes a bigger bet with a bigger payoff and a bigger risk.

“What I care about on transmedia is whether it’s going to be good, since that is the risk,” Bilson said. “It’s bad if it cheapens the brand or content.”

THQ could definitely use some bigger hits. The company launched Homefront, a high-profile shooting game that was in the works for three years, and it has sold more than a million units. But the company has had its ups and downs in recent years and is somewhat profitable, reporting net income of $28.5 million on revenue of $323.1 million (on a non-GAAP basis) for the third fiscal quarter ended Dec. 31. While those revenues are large, THQ is a lot smaller than rivals such as Electronic Arts and Activision Blizzard. In February, THQ lowered its expectations for revenue in the current fiscal year, targeting about $800 – $815 million compared to its earlier estimate of $825 – $855 million.

But Bilson has high hopes. He said in an interview that the timing is very well coordinated on the film and new game, thanks to a few years of planning to make it happen simultaneously. Often, movie games aren’t coordinated on release schedules because either the movie or the game gets delayed.

Bilson said the good thing about the SyFy movie is that THQ didn’t fork over any money to create it. It’s like a two-hour commercial for the game that doesn’t cost THQ a penny, he said. In exchange, THQ added the SyFy logo to the game box.

“We have the same consumers,” he said. “We get all on-air promotion with SyFy, which is a multiplayer on our marketing budget.”

With the upcoming game, Saints Row The Third, THQ will also have a big transmedia strategy. Since that game is one of the company’s biggest properties, it is going all out on strategies related to music, films, TV, books, toys, Facebook games and other strategies.

Check out the video below, including the trailer for Red Faction Armageddon.