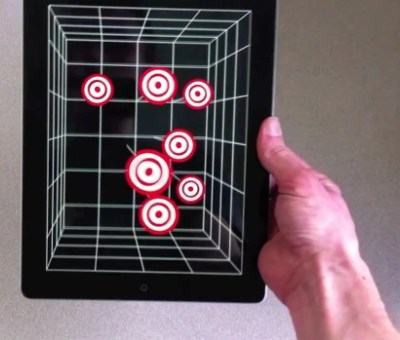 French researchers have managed to develop glasses-free 3D technology for the iPad 2 and iPhone 4 based entirely on how you’re looking at their screens.

The technology is in its early stages now, judging from the video below, but it shows that both the iPhone 4 and iPad 2 (as well as many other devices) can deliver 3D experiences without the need for glasses, and without specialized screens like those found in Nintendo’s new 3DS portable console.

Jeremie Francone and Laurence Nigay from the Engineering Human-Computer Interaction (EHCI) research group at the Grenoble Informatics Laboratory are the mad geniuses behind the video. They say that their head tracking technique relies only on the front-facing cameras in the devices to create a “glasses-free monocular 3D display.” It doesn’t take advantage of the iPad 2 or iPhone 4’s acccelerometer at all — which means that the technique could conceivably be replicated in any device with a camera facing the user.

The two say they were inspired by the work of Johnny Chung Lee, who showed off a similar glasses-free head tracking demonstration on the Nintendo Wii several years ago.

If it manages to make its way outside of the research phase, the technology could open up the door for glasses-free 3D gaming, 3D model viewing and more on standard device screens. It would also accelerate the push to 3D, which is currently limited by clunky glasses and expensive glasses-free 3D screens.