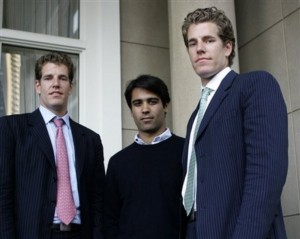 Facebook’s long legal dispute with Cameron and Tyler Winklevoss may be ending.

A US appeals court ruled today that the Winklevoss twins must accept the settlement they reached with Facebook back in 2008, according to reports in Reuters and elsewhere. The twins famously alleged that after they hired Facebook founder Mark Zuckerberg to work on their project ConnectU, he stalled their site and stole the idea for his own social network. (And of course the story was dramatized last year in the film The Social Network.)

Facebook reached an agreement with the twins for $20 million in cash and $45 million in stock. That stock should be worth much more now, but the Winklevoss brothers appealed the deal anyway, arguing that Facebook deceived them by not disclosing an internal valuation that suggested the shares were less valuable than they believed. Judging from interviews that they gave to the press, from the twins’ perspective, the legal case was as much about exposing Zuckerberg’s alleged wrongdoing as it was about the money.

But while the Winklevosses may have seen this as an issue of justice, the courts were apparently unimpressed by their specific legal grievances. A lower court already upheld the settlement, and US 9th Circuit Court of Appeals did the same today. Chief Judge Alex Kozinski wrote:

The Winklevosses are not the first parties bested by a competitor who then seek to gain through litigation what they were unable to achieve in the marketplace. And the courts might have obliged, had the Winklevosses not settled their dispute and signed a release of all claims against Facebook. … At some point, litigation must come to an end. That point has now been reached.

Update: Tyler Winklevoss has posted the following statement from his attorney Jerome Falk on Twitter, suggesting that he and his brother will appeal the decision.

The Ninth Circuit has affirmed the District Court’s enforcement of the settlement over my clients’ objection on the ground that the settlement was obtained in violation of the federal securities laws. I appreciate the Ninth Circuit’s thorough discussion of the issues. However, I respectfully disagree with the Ninth Circuit’s conclusions. In my judgment, the opinion raises extremely significant questions of federal law that merit review by the entire Ninth Circuit Court of Appeals. For that reason, my colleagues and I will file a Petition For Rehearing En Banc within the next fifteen days.