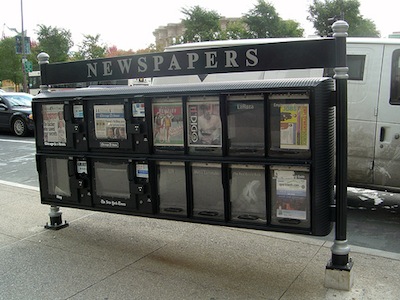 For someone who works at a school of journalism, Jeffrey Cole isn’t particularly optimistic about the future of newspapers.

Cole directs the Center for the Digital Future at the USC Annenberg School of Communication and Journalism, which has been studying the effect of the Internet since 2000. Cole said that 11 years ago, he appeared at a newspaper convention and told the attendees that their industry had only 25 or 30 years or life left. Today, at the Ad:tech conference in San Francisco, he said he’d been too optimistic — he predicts now that most newspapers have less than five years to go.

The reasons for this are pretty familiar for anyone who reads “death of journalism” articles. In the past, people would usually pick up the newspaper habit in their 20s or 30s, but that isn’t happening anymore, Cole said, so when an old newspaper reader dies, they aren’t being replaced. And where prognosticators once tracked the disappearance of two-newspaper towns, they’re now counting the increasing number of no-newspaper towns.

There will be some survivors, Cole said, mainly “global players” like The New York Times. And one of the ways they’ll continue is on new devices, especially the iPad. He suggested that no matter how newspapers bungled the transition into an online world, they were inevitably going to have a hard time on the Internet, which is fundamentally a “lean forward” experience.

“No one wants to lean forward and read a newspaper,” Cole said. “They might read an article in the newspaper.”

The iPad, on the other hand, is a “lean back” experience and “restores newspapers and magazines to their natural environment.” By the way, Cole isn’t using the iPad as shorthand for tablets in general — he predicted that Apple’s device will continue to dominate the market, even after 2015, when Gartner predicted that the iPad will finally drop below 50 percent marketshare (as it loses share to Android). Cole said he’s never seen company get a product so right the first time around as Apple did with the iPad.

“Apple has moved the goalpost before the other teams have taken the field,” he said.

Not that newspapers are alone in their trouble. That’s just part of Cole’s broader prediction that “all media will survive but most will be smaller players in a digital era.” In the music industry, CDs will soon vanish. DVDs will do the same, and we’ll see the disappearance of many movie theaters. And while books will survive, the vast majority of reading will occur digitally — if you own physical books at all, you’ll only have a few beautiful art books.

The one exception, Cole said, is television, which is growing again now that new screens and devices allow it to expand beyond the home.