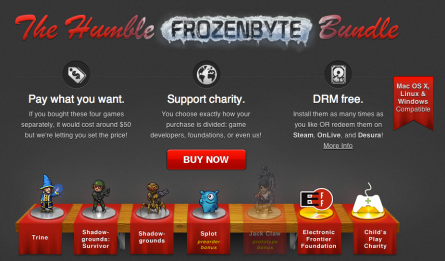 Y Combinator-backed Humble Bundle is launching its second official batch of games that allows users to set their own price for the cost of the download. This time, the package was created by a single developer, indie game house Frozenbyte.

Humble Bundle gives independent developers a way to publicize their games and compete with the major publishers in an industry that regularly churns out triple-A titles.

Much like the Apple App Store, independent game developers struggle for visibility on distribution systems like Steam and the Xbox Live Arcade. Humble Bundle brought visibility to games like World of Goo — which ended up porting its game to the iPad because it became so popular.

Like the last bundle, gamers can pay whatever they want for Frozenbyte’s five titles, distributing the profits amongst the developer, two charities and a tip for Humble Bundle. The default payment gives a majority of the funds to Frozenbyte, with Humble Bundle receiving around 5 percent of the payment as a tip.

It’s a very effective distribution model that could make a decent amount of money, too. Humble Bundle hasn’t disclosed how much money the company has made off of its sales, but it ended up selling more than $1.8 million worth of game bundles in less than two weeks. If most gamers used the default payment schedule, that means Humble Bundle picked up more than $90,000.

Humble Bundle went through startup incubator Y Combinator, which launched specifically to organize operations after 2009’s Humble Indie Bundle (put on by a group of indie game developers) ended up being a runaway success. The sales let gamers pick up to five games that are free of copyright protection software, and lets them pay whatever they want for them — anywhere from 1 cent to $6,000. After deciding what to pay, gamers can decide what percentage of the fund goes to charity, to the developers and whether to give Humble Bundle a tip for its troubles.

Gamers will get licenses to download the games in the Humble Bundle through Steam as well as through independent downloads — a new feature in the latest batch of games. Steam has become one of the most popular avenues for distributing indie games and boasts an enormous social network of gamers, so there’s more appeal to buying a game through Steam than through another distribution channel. Humble Bundle is also giving gamers the option to get a license for Trine that works on OnLive, an online service that streams video games through the Internet rather than running them on local machines. OnLive was, not surprisingly, the largest contributor to the last Humble Bundle, donating $5,000 for the second batch of games.