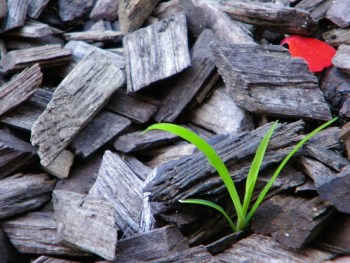 Biofuel company KiOR is going public and wants to raise $100 million for a new plant that converts wood chips to petroleum, according to a filing with the Securities and Exchange Commission.

KiOR is bucking the biofuel trend by focusing on transportation fuel — for cars, jets and the like. The company wants to produce gasoline that costs around $1.80 per gallon when produced from renewable petroleum.

KiOR’s technology converts wood chips to a substance that behaves similarly to typical petroleum. That price will come with a plant capable of processing 1,500 tons of feedstock every day. The KiOR demonstration plant currently in operation can only process 10 tons per day today.

Some of the most lucrative prospects for biofuel companies like Solazyme aren’t fuels at all. They’re in producing chemicals for other purposes, like creating a line of anti-aging beauty productsand food additives. Dow Chemical recently inked a deal with Solazyme to replace an insulating petroleum-based oil that insulates electric transformers from heat and discharging electricity with petroleum produced from algae.

KiOR is also looking to close out a $1 billion loan from the U.S. Department of Energy. Failing to do so would be a huge blow for the company, which has not been profitable in the past 3 years and lost $46 million last year. It’s funded by Khosla Ventures, which will control any board-member action and any other actions that require shareholder approval, according to the filing.

Algae-produced oil might become even more popular in the chemical space, since companies like Solazyme have set a target of between $60 to $80 per barrel. To put things in perspective, futures for light, sweet crude oil cost more than $105 as of this morning — which will inevitably send up the price of just about everything that uses petroleum as a production component.

But clean technology market research firm Lux Research said biomaterials production will grow faster than biofuels, with 17.7 percent growth each year. That growth would be driven by major deals like this one, according to the firm. The biochemical industry was also worth $11.7 billion last year, up 7 percent from 2009. That’s because about 95 percent of plastics use some petroleum in some way — and most companies are looking for a cheaper alternative.