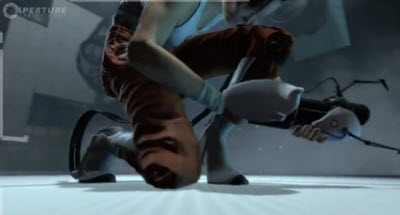 Valve‘s original Portal game was an indie favorite that had a lot of fans, just not millions and millions of them. For Portal 2, Valve’s marketing machine has focused on widening the audience for the physics-based shooting game. And it has hit upon a way to target the female audience — or perhaps just the larger community of boot fans — with its latest game trailer.

The video shows off the environment of Portal 2 — which debuts on April 19 — with test subject Chell running around shooting portals in the environment. Chell is demonstrating the “long fall boots,” which are like armor for your feet to protect you in long falls. The video, narrated by Cave Johnson, owner of Aperture Laboratories, is tongue-in-cheek and is the latest in a series of trailers aimed at stoking the appetite for Portal 2, which could be one of the biggest games of the year.

Portal 2 is one of the most anticipated games, according to the GameFly Top Most Popular lists. Some of that is no doubt due to the fact that Portal has fascinating game play, where you shoot a portal into one wall and then another. You jump into the first portal and come out the other. You then have to use this basic game mechanic to solve increasingly difficult puzzles. Portal 2 extends that with cool features such as the long fall boots, and it will be twice as long as the original game.

Pulling out its marketing stops, Bellevue, Wash.-based Valve has also launched an alternate reality game related to Portal 2. That game, which is still in progress and is being solved as a crowdsourcing effort, has fans guessing about the game and trying to solve the puzzle in advance of the launch.

Portal was a fairy-tale success story for independent game developers. The game was a successor to an independent game called Narbacular Drop, which was developed by a group of students from the Digipen Institute of Technology. The students were hired by Valve and spent a little more than two years developing Portal.

In the game, players control a protagonist named Chell who must navigate her way through a variety of environments with her trusty portal gun. Her guide and tormentor throughout the game is an artificial intelligence called GlaDOS — who evokes classic villainous AIs (like  HAL 9000) with a more comedic bent.

Portal was launched as part of The Orange Box — a collection of games released by Valve that included Half-Life 2 (and two of its expansion episodes), and Team Fortress 2. Despite being an unknown property (and a shorter game than any of its Orange Box companions), Portal went on to gather a massive cult following thanks to its unique gameplay, and its well-written and hilarious script.