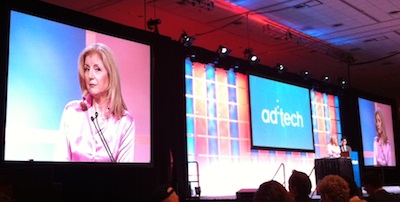 Online news and opinion site The Huffington Post has been the target of plenty of criticism since it launched in 2005, and the critics seem to have only gotten louder since AOL acquired the company earlier this year. But editor-in-chief Arianna Huffington was unapologetic today at the Ad:tech conference in San Francisco, where she defended her editorial practices.

Criticism of the HuffPo seems to focus on two main areas. First it publishes many blog posts that were written for free — in fact, a group of HuffPo bloggers led by union organizer Jonathan Tasini recently filed a class action lawsuit against the company around this practice.

Huffington argued that free blogging and paid journalism represent “two very different worlds.” The Huffington Post is giving its unpaid bloggers a chance to voice their opinions to a potentially enormous audience — it’s an extension of what people are posting on “any form of social media,” including sites like Twitter and Yelp. In fact, AOL is extending that practice to its local journalism effort Patch.

The person who asked about the HuffPo’s payment practices today said that he himself blogs for the site for free, and he didn’t seem to have any complaints. Huffington said she was “delighted” that he blogs for the HuffPo, but she noted that there are “no commitments” and “no deadlines”: If he stopped writing for the site, “Nobody would bug you.”

At the same time, Huffington noted that AOL employs hundreds of writers. (Even though AOL recently announced major layoffs, it also said that it would be hiring enough new people to be “a net importer of journalists.”) Those journalists and other paid employees create the “architecture” for the broader blogging platform, she said.

The other HuffPo practice that gets a lot of flack is “aggregation”, where it posts about news originally reported on another site, usually with a link back to the original source. New York Times executive editor Bill Keller has called Huffington “the queen of aggregators” and complained that “too often it amounts to taking words written by other people, packaging them on your own Web site and harvesting revenue that might otherwise be directed to the originators of the material.”

Huffington said that she addressed this issue at a recent “all hands” AOL staff meeting. In addition to unpaid bloggers and paid reporters, aggregation is the third major piece of the HuffPo strategy. Even if she had $10 billion to spend on original reporting, Huffington said she would still include news aggregation on her site, because “I would not claim we are the only source of good report and good writing.”

(I should probably note that while VentureBeat pays its writers and freelance reporters, we also run guest columns that the writers creat for free, and we also publish plenty of posts that rely on another site’s reporting. So to the extent that I’m pointing fingers here at all, we’re hardly innocent.)