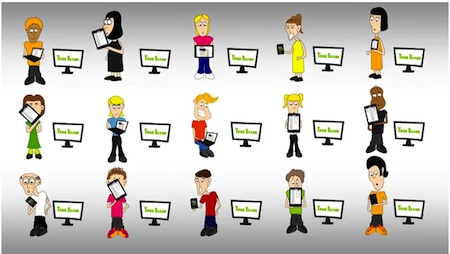 As more companies jump on to the social TV bandwagon, a new startup called Loyalize is offering tools for brands and content providers to create their own apps for real-time participation around any event — including TV shows.

I can’t go more than a week or two without getting an email about a new TV check-in startup, but it seems like there’s an audience here. For example GetGlue, which runs its own content check-in service and also allows other companies to use its technology through an application programming interface, just announced that it has 1 million users.

Loyalize goes beyond TV, and beyond check-ins. I talked to chief executive Todd Greene today at the Ad:tech conference, where he launched the company, and he said he’s not that excited about social TV, per se — it’s the real-time interactions that interests him. Yes, users can check-in to a TV show. Yet Greene said things get most interesting after the check-in. Loyalize apps can include a number of features, including news feeds, polls, a Smack Talk option that lets sports fans debate about their favorite teams. The apps can also include virtual currency which that users redeem for prizes.

The San Francisco startup spun out of social recommendation network Trusted Opinion, and it has already signed up one big customer — it built components of the SocialTV service embedded on Motorola’s smartphones and tablets. When I asked Greene about the “white label” approach of selling his product to companies rather than consumers, he said this makes sense because it’s is a natural way for brands to engage with the audiences that they’ve already built.

At the same time, he acknowledged that there are risks, because Loyalize doesn’t have complete control over companies customize and market the app. So Loyalize is “not precluding” the possibility of launching a consumer app in the future.