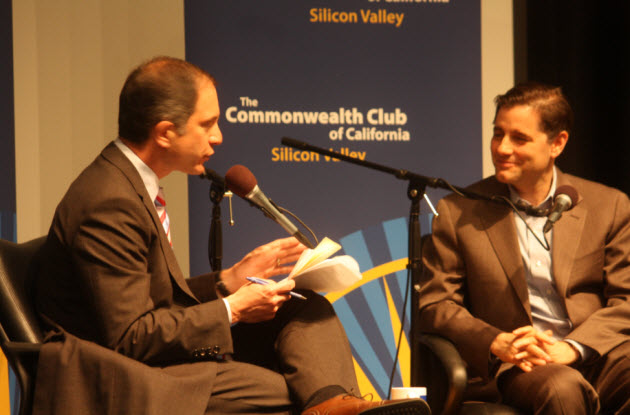 Federal Communications Commission chairman Julius Genachowski said today he is hopeful that the government will be able to reallocate spectrum to satisfy the insatiable appetite for mobile broadband capacity.

But rather than seize the spectrum outright, Genachowski wants Congress to approve a plan that would allow the current owners of the spectrum to share in the proceeds as the government auctions it off to infrastructure companies. Once that spectrum is in the right hands, Genachowski (pictured right) said that a wave of mobile innovation could occur that will keep the U.S. competitive in the global competition for communications technology. In a chat moderated by Fortune writer Adam Lashinsky, Genachowski spoke at the Commonwealth Club event at the Computer History Museum in Mountain View, Calif.

The process of reallocation through auctions will likely lead to the most fast and efficient way to get more bandwidth to mobile broadband subscribers, who are so plentiful now they are causing data traffic jams on the mobile phone networks.

Right now, the available wireless spectrum is set aside for uses such as digital TV services, and broadcast TV companies have not shown any interest in giving up that spectrum willingly. The FCC could seize it, but that would likely lead to a long legal process.

Instead, Genachowski proposed that the spectrum owners be compensated in part after the government auctions the spectrum. Genachowski said that the FCC has some of the authority it needs to put this plan into place and is hopeful that Congress will give it the full authority to conduct the “incentive-based auctions.” By doing it this way, more spectrum would become available, and that would help satisfy the crushing demand. Genachowski said this plan has bipartisan support, support from economists, and support from President Obama.

“I’m hopeful it can happen soon,” he said. “Every day we wait has real costs. We have more dropped calls, more consumer frustration.”

The problem with mobile broadband is that smartphone and tablet usage are stressing the capacity. Smartphone users consume about 24 times more data bandwidth than users of ordinary mobile phones, while tablet users consume 104 times more. Netbook users with wireless cards consume even more. There’s a huge gap between available capacity and the demand for it, Genachowski said.

“Spectrum is a scarce resource where physics puts limits on how much data can travel over the air waves,” he said. “We can’t close the gap because it is so large. We have to allocate spectrum from existing users to those who need it.”

Meanwhile, Genachowski said he was disappointed that the U.S. has not been able to extend broadband communication to more of its citizens. Roughly 25 million people live in regions with no internet access, and another 100 million do not subscribe to services that are available to them. As a result, only 67 percent of the population has broadband access, compared to 90 percent in Singapore.

Genachowski said one recent study found that the U.S. was sixth among 40 countries reviewed in terms of broadband access, but it ranked 40th in terms of how much progress it was making.

“We spend money on programs on universalizing telephone service,” he said. “We need to transform 20th century rules into a smart, efficient broadband access program.”

Genachowski said the U.S. has been the leader in auctioning off spectrum as needed for things such as digital TV. Now the country has to act as if it is in a race to be the innovation leader yet again when it comes to mobile broadband, he said.

“The costs of delays are much greater now because of changes in the global competitive landscape,” he said. “My counterparts around the world are looking at communications as key to economic growth and innovation.”