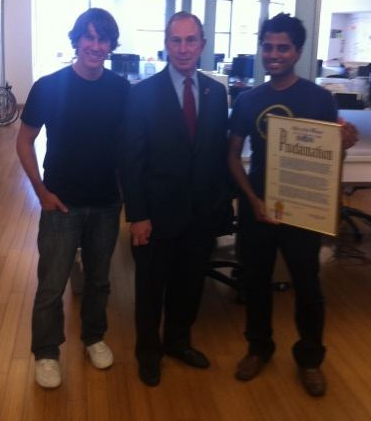 How do you know you’re a hometown favorite in the startup world? When the mayor stops by your office and gives you your own “official” day. New York City Mayor Bloomberg just announced plans to officially proclaim April 16th Foursquare Day on Saturday in New York City.

New York City is proud to be the home of both the powerhouse companies and small startups that are thinking big, creating new jobs, and leading the global economy. Foursquare is one such success story. Started by Dennis Crowley and Naveen Selvadurai around Dennis’s kitchen table in the East Village, it now employs more than 60 people in New York and has more than eight million users worldwide. That is why we are proud to join Foursquare’s founders and fans in celebrating the first global social media holiday. Today, April 16th—4/16, the fourth sixteenth of the year—is Foursquare Day in New York City and around the world.

There will be a range of activities and events have emerged to take place during the day for the check-in app’s 8 million users, according to Foursquare’s PR team. Several in particular caught my attention, including: