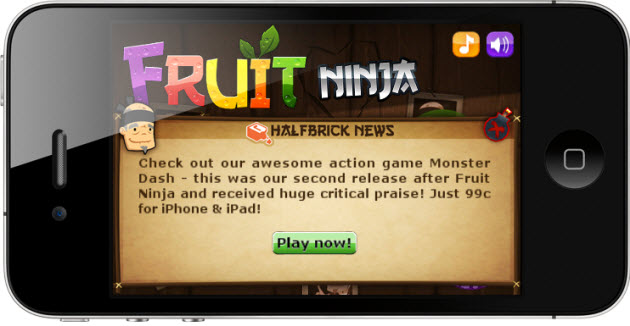 Mobile game maker Halfbrick made out like a bandit with its Fruit Ninja mobile game, selling its game to 23 million players. Now its latest game, Monster Dash, is starting to take off as well, thanks to Halfbrick’s alliance with the cross-promotion efforts of OpenFeint. 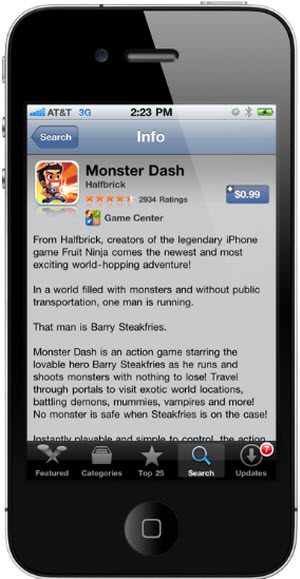 Today, Monster Dash is rising in downloads thanks to OpenFeint’s newest feature, dubbed “developer announcements.” The announcement lets a developer promote one game to a user who is playing another game from the same developer.

Sometimes, mobile developers get lucky with a game that goes straight to the top of the charts. But other games can use all the help in the world to get noticed, and that’s what OpenFeint provides for them. By adding social cross-promotion and virality to mobile games, OpenFeint is starting to show it can be a kingmaker among mobile developers. Getting games discovered on mobile app stores is still exceedingly difficult, but as Halfbrick’s case study shows, it’s getting easier.

OpenFeint has created a social platform that allows mobile game players to engage in chat, challenge friends to multiplayer matches, and see where they rank on leaderboards.

Developers use the OpenFeint platform so that they don’t have to worry about anything except building a fun game. OpenFeint has additional tools and marketing programs to help the developers reach bigger audiences. OpenFeint can cross-promote games that are similar to the one being played, and it can help developers adapt an iPhone game to run on Android. The end result is more visibility for a game.

With Halfbrick’s Monster Dash, OpenFeint promoted the game so that users would see it while playing Fruit Ninja. If they tapped on the little promo, they could immediately install the game and play it. After OpenFeint did the cross promotion, Monster Dash’s downloads spiked 123 percent in two days, said Phil Larsen, marketing director of Brisbane, Australia-based Halfbrick. The game also jumped from No. 143 on the Apple App Store to No. 4 in free apps. In paid apps, the game moved from No. 267 to No. 84.

OpenFeint has other ways for developers to get more players through promotions, such as Free Game of the Day and Fire Sale. The first offers a paid game as a free app for one day, while the Fire Sale uses a group-buying model to drive down the prices of premium games.

Halfbrick was founded in 2001. OpenFeint has more than 5,000 games with more than 75 million registered users.