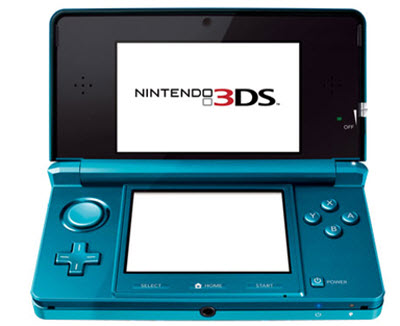 Nintendo said today that it sold just shy of 400,000 3DS handheld gaming system units in its first seven days of sales in the U.S.

That’s not bad, but the high sticker price of $249 for the 3DS may have held consumers back. It’s a sign that the new 3DS may not be as big a blockbuster as the original Nintendo DS, particularly in an age of smartphone and tablet competition.

Meanwhile, Nintendo said it sold almost 2.5 million Pokemon games in March. Overall, sales of Nintendo portable hardware and software hit a record in the U.S. for March. Market researcher NPD said the older DS outsold (460,000 units) the 3DS, which can display stereoscopic 3D without the need for glasses. In other words, sales of Nintendo’s older devices also provided a lot of competition for Nintendo’s newest device.

“Both Nintendo 3DS and the Nintendo DS family had a strong month, indicating that Nintendo has something for everyone,” said Charlie Scibetta, Nintendo of America’s senior director of corporate communications.

The Nintendo Wii sold more than 290,000 units in the U.S., compared to 433,000 Xbox 360s sold during the month. Overall, Nintendo U.S. hardware sales amounted to 1.1 million units. Nintendo is planning to launch its Wii Play Motion game on June 13, packaging it with a free Wii Remote Plus controller.

Nintendo says it will offer a free update for the 3DS in the future to enable internet access and access to Nintendo’s eShop, which will let users download software, game trailers, screen shots and other information. On June 19, Nintendo will launch a 3DS version of The Legend of Zelda Ocarina of Time, a re-mastered version of one of Nintendo’s biggest console hits. Movies will come to the 3DS this summer via Netflix, for those with an unlimited Netflix membership.