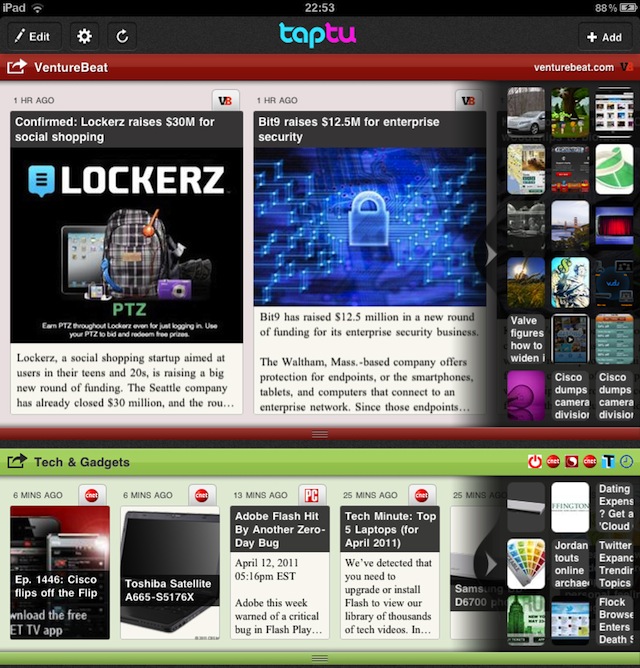 Taptu, a company originally focused on mobile search, has become more of a challenge to “social magazine” Flipboard in recent months by remaking itself as a customizable app for reading news. Now that challenge is becoming more serious with Taptu’s launch of a new iPad app and expanded capabilities to “DJ your news”.

And now users can personalize that approach for their own interests, DJing the news by combining their favorite news sources to create a new “stream” from scratch, or by taking one of the topic streams curated by Taptu and customizing it with their own sources.

I’ve been playing with the Taptu iPad app for the last day or so, and I’ve been pretty impressed. As much as Lazar emphasized search and customization, I’ve been struck by with the app’s design, which allows users to browse many headlines at once without feeling overwhelming. If a company is going to take on beautiful apps like Flipboard and Pulse, good design is a requirement.

Chief executive Mitch Lazar joined the company last year, and he said his main goal was to help Taptu narrow its focus to an area where it could compete and make money. Since then, the company has released newsreading apps for the iPhone and Android, and today it’s announcing its iPad app too — or more specifically a “universal” iOS app that will deliver an optimized experience for the iPhone or the iPad, depending on your device.

Even though the company, which is headquartered in Cambridge, England and Denver, Colorado, is no longer focused on mobile search, Lazar said the technology is still used in the app and it helps differentiate Taptu from better-known competitors. The company is “trying to come at it as a search problem,” Lazar said.