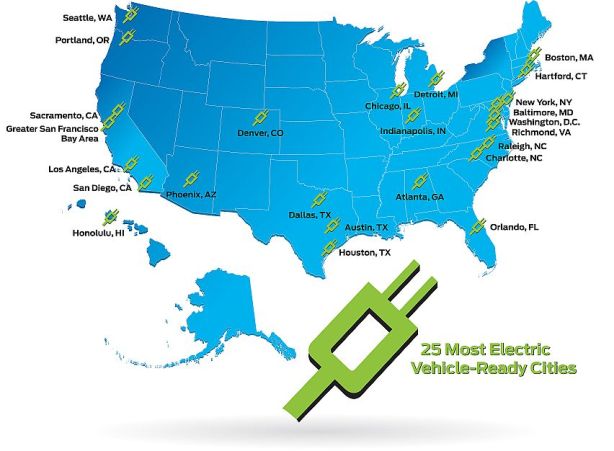 Ford has identified the 25 most electric vehicle (EV) ready cities in the U.S., based on the company’s latest research. The 25 cities are dotted all over the country from Hartford to Honolulu. A previous Pike research report highlighted 6 cities expected to be early EV adopters: New York, Los Angeles, Chicago, Philadelphia, Dallas and Houston.

A number of cities are putting special parking in place for EVs. In Honolulu all parking facilities with 100 parking spaces or more must designate at least 1 percent for EVs by the end of the year. Los Angeles will have designated charging spots throughout California where EVs can park after paying a $17 application fee.

Boston, New York City and Philadelphia are looking into opportunities to promote travel between the cities by electric vehicle. In Houston, electricians can be given immediate online approval to install chargers.

Ford plans to launch five electrified vehicles in North America by 2012 and Europe by 2013. Two Ford EVs, the Ford Fusion Hybrid and Ford Focus made it into the top 10 EVs of 2011 selected by the Kelly Blue book.