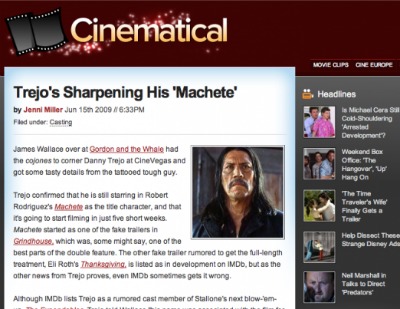 One thing you may not know about me is that I am a writer. More specifically, I’m a freelance writer. This means I can have several clients at once, work from home in my underwear, and set my own hours. It is basically like being a prostitute, but with less stringent hygiene requirements.

Up until last week, one of the places I wrote for was Cinematical, a fine website devoted to news and commentary related to the film world. But now Cinematical has essentially been run into the ground by its corporate overlords. The writers were let go on Wednesday. The editors had already quit. What happened to this once-thriving movie blog? Gather ’round and pay heed and I will tell the tale!

Cinematical’s parent company, AOL, recently purchased the Huffington Post blog empire from its owner, suspicious foreign person Arianna Huffington. They paid $315 million, which AOL had lying around from all the old people who still pay for AOL dial-up access even though they have cable Internet. Thrilled by her windfall, Arianna Huffington immediately used the money to buy a closetful of pantsuits made from the skins of poor people.

At first glance, AOL buying HuffPo might look like a good thing. Huffington is well-known for not paying her writers, who contribute work for free because it gives them a platform from which to make their voices heard. Perhaps AOL, as the new owner, would make HuffPo start paying its writers. Say what you will about AOL, but when you perform work for them, they pay you. They’re old-fashioned like that.

But this is not what happened. As it turns out, not paying people is what had attracted AOL to Huffington in the first place. “Tell us more about this ‘not paying people’ system,” AOL said, intrigued. AOL liked the cut of Arianna Huffington’s jib, if you’ll pardon the unpleasant imagery. They put her in charge of all the properties AOL already had — Cinematical, Moviefone, Engadget, TechCrunch, PopEater, TV Squad, and a bunch of other blogs. 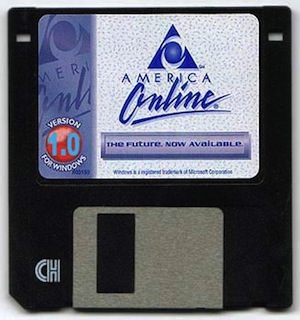 I did mention Moviefone in that list. This will be important later, so I’d better explain it. Moviefone is a site that is very popular for its ability to tell you what time a movie starts once you tell it your zip code. In fact, within the field of telling you what time a movie starts after it knows your zip code, Moviefone is virtually unrivaled. (Except for Fandango.) But you may not realize that Moviefone also produces content, in the form of celebrity profiles and movie previews and such — sort of a fluffier, glossier, shallower version of a news-and-reviews site like Cinematical.

AOL has owned Moviefone since 1999, and Cinematical since 2005, but it wasn’t until 2010 that AOL slapped itself in the forehead and said, “Why the dickens do we own TWO movie websites?!” So they kind of — but not really — merged the two sites together, under Moviefone’s direction. Cinematical was still called Cinematical, but it was repositioned as Moviefone’s blog rather than its own site, and if you typed www.cinematical.com into your browser, it would take you to blog.moviefone.com. Cinematical continued to operate more or less as it had before, but now with an additional layer of bureaucracy and interference, and with readers being confused as to why we weren’t telling them what time the movies started.

I should stress that whatever problems we had, none of them were Moviefone’s fault. They were nice folks. They were tossed into an awkward situation just like we were. It was like Moviefone and Cinematical were stepsisters who’d been living in different wings of AOL’s house for years, until suddenly AOL made Cinematical move into Moviefone’s bedroom. And Moviefone, being older and more widely trafficked (I’ve lost the stepsisters analogy here), was put in charge. Where Cinematical used to be able to put up a poster on any wall it wanted to, now it had to check with Moviefone first, and Moviefone might say, “Well, I was gonna put something else there,” and there’d be some negotiating, and soon it got to where it was easier for Cinematical to just put up fewer posters.

So this is how things stood when, in early February, AOL bought Arianna Huffington. (Let’s make this easier and say they actually bought her.) Her blogs and AOL’s blogs were smushed together into a new thing called Huffington Post Media Group. The transition was going to be arduous and complicated. This was particularly true for the people who write AOL’s press releases, who had to work overtime issuing statements with business terms like “restructuring” (which means firing people), “streamlining” (which also means firing people), “re-branding” (which means making people forget all the negative associations they have with AOL and Arianna Huffington), and “synergy” (which doesn’t mean anything). In March, 200 of AOL’s full-time employees were laid off in the United States, plus another 400 in India. In other news, apparently AOL used to have 400 employees in India. 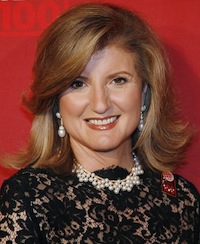 Next on the chopping block were all the freelance writers and editors who worked at the blogs — which was basically everyone. Huffington will no longer need these freelancers because she’s in the process of hiring full-time staffers to produce the content. Rather than pay independent contractors by the piece, it’s more cost-effective to have the work done in-house. That’s how newspapers operate, and goodness knows that industry is running smoothly.

What was to become of us freelancers? And when? For several weeks, AOL lived up to its reputation within the communications field by doing a terrific job of making it seem like they were communicating with us without actually conveying any information. Our only liaison with AOL was Moviefone’s editor-in-chief, and AOL wasn’t telling her much, either. We got occasional e-mails reassuring us that everything was going to be fine, that it was business as usual, that we should just keep on doin’ our thing. We were like stewardesses handing out peanuts on the Hindenburg.

Unhappy with the way things were heading, two of Cinematical’s editors, Scott Weinberg and Peter Hall, resigned. Then, on April 4, Erik Davis — the site’s managing editor, the captain of the team — also quit. AOL had offered him a full-time position under the new structure, but he wouldn’t take it. He didn’t want to see all his writers get fired while he got a promotion. Plus, he’s a movie guy. He knows that when space aliens invade, and a weaselly human swears allegiance to them in exchange for not being killed, the weaselly human always winds up getting killed anyway. Erik Davis is no dummy.

The next day, we all got an e-mail from Moviefone’s editor-in-chief. It began:

I know there’s been a lot of uncertainty regarding the future of freelancers and your status as a writer for the site. I personally apologize for the lack of communication, but I’ll tell you what I can.

We will, indeed, be moving away from a freelancer model and toward one relying on full-time staffers. Sometime soon — this week, I believe — many of you will be receiving an email informing you that your services as a freelancer will no longer be required. You will be invited to contribute as part of our non-paid blogger system; and though I know that for many of you this will not be an option financially, I strongly encourage you to consider it if you’d like to keep writing for us, because we value all of your voices and input.

The ways in which this is hilarious and outrageous need hardly be enumerated. Several of us tendered our resignations immediately, to spare them the trouble of firing us. Nobody was going to take them up on their offer to contribute to the “non-paid blogger system.” We were rather insulted, actually, at least to the extent that it is possible to insult someone whose job requires him to write about Shia LaBeouf. “Non-paid blogger system”? Please. We may be whores, but we are not sluts.

Read the rest of this post at ericdsnider.com. Reposted here with permission by the author.

Eric D. Snider is a freelance writer, critic, columnist, humorist, bon vivant, raconteur and man-about-town. He was raised in Southern California, lived in Utah for 10 years, and now resides in beautiful Portland, Ore.