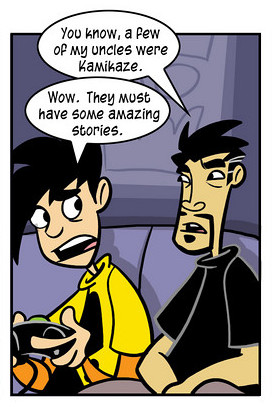 Depending on how big of a Penny Arcade fan you are, you may not know who Robert Khoo is. But without Khoo, you may not even be a PA fan. It's his business acumen that turned PA into a sprawling, multimedia brand-thing, which includes a Penny Arcade game, the Child's Play charity, and of course, PAX.

I had a chance to talk to Khoo (on the right, in a rare comic appearance) about how, over the last 9 1/2 years, he has worked to help make Penny Arcade what it is today.

What is your role at Penny Arcade?

Robert Khoo: I run the business side and the day-to-day operations of the business. Things I don’t touch are pretty much anything “creative” — the comic, the newspost, that sort of thing — the only time I’m involved with that side is if it’s a question of distribution or legality. For our side bits, I’m the show director for PAX and the managing director for Child’s Play.

Back when Penny Arcade was just two guys making a game-related webcomic, what made you think, “I need to work with these people,” and how did you first approach them?

RK: I was a pretty hardcore gamer growing up and had been reading PA religiously since 1999. The long story short was that I had a chance run-in with Mike and Jerry, and after discovering they really had no direction with the business, I took a shot and quit my job to work for them for free for two months. What got me in the door was (they tell me) a clear direction and plan and apparently my ability to pitch them on my execution of said plan.

Is the Penny Arcade of 2011 pretty much what you envisioned when you joined the team?

RK: I envisioned it as being a traditional media company (albeit a smaller version of one) with the big difference being that Mike and Jerry kept control. I felt like I could create an engine that allowed them to create, maintain credibility, AND be profitable, and looking back on it, there were some diversions here and there, but by and large the plan seems to have been kept intact.

In the early days, what was your roadmap? How did you turn Penny Arcade into a transmedia brand and a huge trade show?

RK: The nitty-gritty of it really focused on the highest margin piece of business — advertising. Once that stabilized, we were able to grow other portion of the business and then leverage both the capital and the relationships we had built into PAX. Keep in mind, however — PAX wasn’t in the original business plan. The opportunity presented itself, and we took a look at our resources and capabilities and jumped in, headfirst.

Penny Arcade's charity arm, Child's Play, is the leading charity in this industry — where'd the idea come from, and how'd you help get it to where it is today?

RK: The seed of philanthropy first started with Mike and Jerry wanting to figure out ways to help the Seattle Children’s Hospital. They tried to figure out ways to go in and install game systems in waiting rooms, but more than one roadblock killed that concept pretty quick. A few months later, there was some press on how gamers were terrible people, how they didn’t contribute to society, etc. We thought about ways to turn something like that into a positive and from that discussion spawned Child’s Play. The idea was for the community to band together for something so simple and pure that you really couldn’t look at it in any other way than positive. In less than a month, gamers raised over $250k, and from there it’s just snowballed into this incredible show of support, year after year, from both the community and industry alike.

Similarly, what was the genesis of the Penny Arcade Expo, and how do you see PAX evolving in the future? 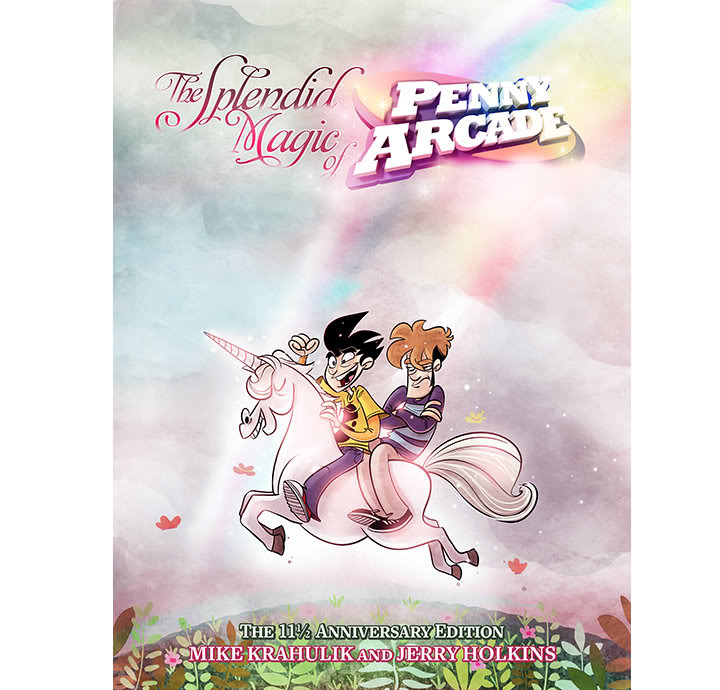 RK: PAX actually started from Mike, Jerry, and I being at a geek convention and thinking “this would be way more fun if it were focused 100% on games.” There’s a whole story about the decision-making process, but it would take way more than is allowed for this article to tell — you can read the full writeup in our anniversary book if you’re super interested. :) In short, we bootstrapped it ourselves and after almost killing ourselves pulled off the first PAX in 2004. From there, it’s just grown and grown into what you see today. The future? We’ll see. We’re always exploring opportunities for further expansion, but for the time being we’re focusing on growing our existing shows.

What has working with Penny Arcade taught you about building a brand…and about gamers?

RK: Brands are nothing without the product or concept they’re representing. That statement seems obvious when you spell it out, but it’s worth putting out there. The “strength of a brand” is just a snapshot of momentum, and it’s incredibly easy for that to erode if you get lazy. It’s true that Penny Arcade’s brand is strong, but it’s only that way because of the incredibly hard work of 14 individuals making sure that everything we produce is representative of that strength. From the comic to the merchandise to the types of ads we serve to the PAX experience, everything needs to get scrutinized.

As far as the game community goes, I know I’m biased, but they’re pretty incredible. They’re intelligent, can mobilize in an instant, and [they're] incredibly compassionate. After ten years in the industry, I can say that nothing they do surprises me — at this point I expect the extraordinary and they always deliver.

What advice would you give to content creators who would like to build a Penny Arcade-like empire?

RK: Prepare to make sacrifices. There are many things that are completely out of your control that will contribute to your success, but something that is very much in your sphere is the ability to work harder than the next guy. That means giving up some things that are dear to you. Your social life. Your desire to finish two games every month (mine in college). Your sleep. I know it’s unfair, but if you’re not willing…I can assure you that the next guy is.

What achievement, personal or professional, are you most proud of?

RK: Creating an environment that allowed Mike and Jerry to do what they do best — create. Doing so spawned everything that we have done — Child’s Play, PAX, the Scholarship. Penny Arcade has done some pretty great things, and I’m happy to have contributed in the most effective way I could have.

What is your best or worst gaming memory?

RK: The best was receiving the Famicom from my uncle in Japan years before the NES came out. It put me ahead of the curve and quite literally changed my life. The worst was the end of Star Ocean: Till the End of Time on the PS2 where after 100 hours you are clued into the fact that you are in a computer simulation and that Neo did this way better in The Matrix.