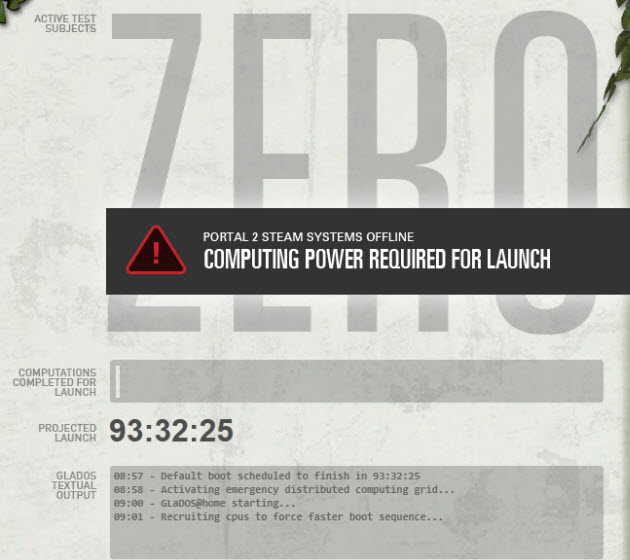 Valve concluded its Portal 2 alternate reality game Friday morning with a new message for gamers: You can speed your access to the game by purchasing more games from Valve’s Steam online game distribution service.

Users aren’t too happy about that, given the reaction on Twitter, as many assumed that the Portal 2 game would be unlocked early on Steam at the conclusion of the alternate reality game, which required users to solve puzzles collectively in the real world in order to make something happen in game fiction.

Portal 2 is one of the biggest game releases of the year, debuting April 19 on the consoles and the PC. But a message from GLaDOS, the evil artificial intelligence character from the original 2007 Portal game, says that the Portal 2 version on Steam can be unlocked early if enough “computing power” activates it. In other words, if you buy an indie game on Steam, you speed the launch date. In the original game, the player is trapped inside a test chamber. The player solves puzzles by shooting an entry portal into one wall and an exit portal into another place. The player jumps into a portal and then emerges from the exit portal. All the while GLaDOS throws obstacles in the way. Now GLaDOS is coming back online for the second game and is already taunting fans.

Fans’ reaction to the game’s conclusion is uniformly negative on Twitter, as they were not expecting to see the entertaining alternate reality game end with a crass commercial message. Twitter user Snowy1256 wrote, “Dear Valve, nice idea but you will not ever live it down. You shall be ranked among Activision in the evil department.” (Journalist Kyle Orland notes that some fans are quite happy that Valve is showing strong support for independently developed games, such as Super Meat Boy, which is part of the Valve Steam promotion).

On the Aperture Science web site, a timer has appeared ticking away the seconds to the April 19 launch. But apparently gamers can collectively speed that up with enough Steam activity. The message from the snooty AI says “computing power required for launch.”

The alternate reality game was quite engaging for fans, but it evidently left them with the impression that they would get access to the game at 9 am this morning. But the ARG only unlocked a timer. Still, it looks like only a few people want to cancel their Portal 2 preorders.