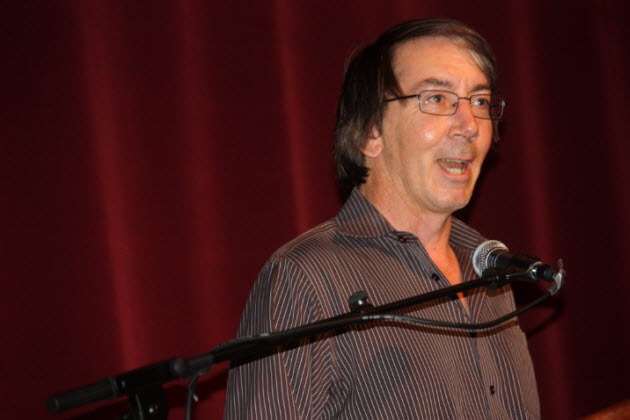 Will Wright is perhaps the most successful video game designer in history, creating games from SimCity to Spore. His games have sold tens of millions of units and have opened up new genres such as life simulations and “god” games. So there’s nobody better to talk about the future of video games. At a recent talk, Wright predicted games will become ubiquitous and more diverse, and some will be meaningful works of art.

The growth of games into new genres and new platforms is leading to what Wright calls the Gambrian Explosion, which is like the Cambrian Explosion 530 million years ago that gave birth to so many new species on earth. Games are flowering into new platforms and categories such as social networks, mobile phones, tablets, and augmented reality. That leads to large audiences and more diverse demographics, as everyone is playing now, from toddlers playing with iPads to older adults playing Wii Sports.

Wright’s most interesting insight during the speech was to recognize that games are following in the footsteps of other entertainment, and other media, and other tools that have come before them. As media expert Marshall McLuhan observed in the 1960s, all media is an extension of ourselves, a tool to extend a piece of ourselves to accomplish a certain goal. Hammers are extensions of our arms.  Phones are amplifications of our mouths. Computers are an extension of our minds.

“Almost every new technology is an amplification of our body,” Wright said, “Computers, the internet, social networks expand everything. The most important thing they expand is our imaginations and our brains. I think of games as imagination amplifiers. We can construct these elaborate worlds, play with them, share them back and forth, and this is one of the culturally most impactful things that our medium can offer. ” 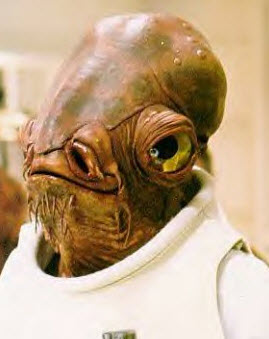 Wright spoke (at his usual exceedingly fast clip, as you can see in the first video excerpt below) on the topic of gaming’s future to a bunch of game developers and students on Friday at the Inventing the Future of Games conference in Milpitas, Calif. The event was staged by the University of California Santa Cruz Center for Games and Playable Media.

A lot of Wright’s talk, which included a kind of intermission, or digression, which he called the Russian Space Minute (see the second video below), wandered into interesting tangents.

Wright sees the growth of games as a natural thing. He did a little experiment with the audience, asking how many people recognized Admiral Ackbar (pictured right) from Star Wars, in the fictional world, versus how many recognized Admiral Chester Nimitz from real world history. He noted that most people recognized Ackbar, the frog-like character. The point is that we accumulate “artificial experiences,” like seeing movies or reading fiction, a lot faster than we accumulate real experiences, such as fighting in a war.

“We see a groundswell of change here as we cross from one generation to the next,” he said, where our accumulated artificial experiences are surpassing our real experiences and our digital online lives are becoming much more expansive compared to our real lives.

One of the benefits of such virtual experiences, which include playing games, is that you gain new perspectives. Wright said he was fascinated by how digital photography is like “training wheels for my eyes.” If you start snapping pictures with a digital camera, he said, you will start looking for interesting camera angles in real life. You will look at things from different angles just so that you can have a chance to see what the digital picture might look like. You learn to see the world from different views.

That’s what gamers are able to do from trying out so many different games with different perspectives. Related to that, one of the cool things about games is their growing diversity. When a kid is playing a game like Grand Theft Auto, the experience is tactile and immersive. Other games let you see the view of the world on a planetary scale.

Now it’s not so crazy to be able to imagine a superstore full of games, much like you have bookstores full of thousands of different kinds of books or magazine racks full of specialty magazines. In fact, that’s pretty much true in mobile app stores now. The same goes for social networks, which are so numerous on the internet now that they’re all competing for your attention as if they were fraternities seeking new pledges during college “rush” week, Wright said.

Wright says that games are also just at the beginning of their evolution. Most people who invent a new medium often fail to realize how significant it will be and where it will go. Comic books were invented as religious propaganda. And Alexander Graham Bell once predicted that it would be possible to have a telephone in every town in America. Wright believes that, like other entertainment media, games will become more pervasive and then become more of an art form.

“Almost any type of media has gone through this evolution where they are now nothing like what people thought they would be,” Wright said.

Games have proven to be addictive and that has become a kind of hurdle as parents worry that their kid will put 500 hours into a game. Wright said that he plays a Nintendo DS game because “it spins up my brain better than coffee.” But games have a capacity to teach at the same time and so they aren’t entirely a menace to society, from Wright’s point of view.

When you get the magic just right, you can achieve a universal success, reaching people far and wide as the movie Avatar did. Ironically, Wright said, everyone from native Americans to Vietnam veterans thought Avatar was about them. That’s a measure of how universal that movie was.

Games are getting close to matching or surpassing the entertainment value of movies. Wright believes one of the ultimate game experiences resembles the Holodeck from Star Trek, the simulation machine that was so real you could walk inside it and be transported to another world where you can’t tell what’s real or not. You could imagine that you’re in a 1920s speak easy — and all the time you’re inside a room in a starship.

Now the combination of games and augmented reality could lead to what Wright calls “situational awareness.” That’s a military term for being aware of your surroundings and your threats. In defensive driving classes, they teach you to have situational awareness so that you know if another car is a threat to you or not, by looking ahead and looking in your rear-view mirrors. With games on mobile devices, game designers could create situational awareness that is highly engaging and relevant to someone.

Making a game out of real life, by blending a virtual world and the real world, is already happening, Wright said. In televised football games, you can see a yellow line on the screen that represents the first-down line that the offensive team has to cross in order to get the first down. That line doesn’t exist on the field, but the TV viewers can see it.

With a smartphone, you can now learn what is in your immediate proximity. You can see if your friends are nearby or if there are restaurants you want to visit or a car show that you might be interested in. If you are wandering in a strange city and your phone can tell you this, and if you can make a more entertaining game out of that experience, you would be much happier, Wright said.

That is one way that games could “engage us in the world rather than distract us from the world,” Wright said.