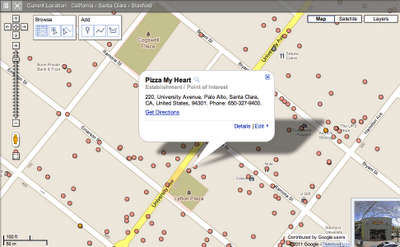 Google has opened its Map Maker tool, which lets locals contribute mapping information to Google Maps, in the United States.

Map Maker has previously been open to 183 countries and regions around the world. But Google has presumably held off on introducing the tool to the US market — for which there is already a ton of data available in Google Maps — until it had thoroughly tested the add-on.

Using Map Maker, citizens can provide information about their local neighborhoods, businesses, campuses, roads, and lanes, adding collective community knowledge to the Google Maps’ satellite-gathered data. Once reviewed by an editor, the edits are made available for everyone to see within Google Maps.

The tool, which launched in 2008, has been instrumental in marking many of the world’s locations in Google Maps. In a blog post marking the news, the company said 30 percent of the world’s population now has detailed online maps of their neighborhoods, about twice as much as before the tool’s existence.

One of Google’s most used products, Maps is responsible for providing local information and directions to users across many devices and platforms, including the iPhone and Google’s own Android. The company has been continually seeking to increase the amount of available mapping information, having most recently added locations of electric car charging stations.