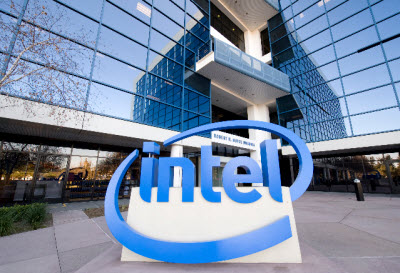 The record results show that a full-blown tech recovery is in high gear despite worries about the state of various regional economies. They also show that smartphones and tablets — two markets in which Intel doesn’t have huge business — aren’t taking away sales from the core PC market.

Intel is the world’s biggest chip maker and its results are a bellwether for the PC market and the tech economy as a whole.

“The first-quarter revenue was an all-time record for Intel fueled by double digit annual revenue growth in every major product segment and across all geographies,” Intel chief executive Paul Otellini said in a statement. “These outstanding results, combined with our guidance for the second quarter, position us to achieve greater than 20 percent annual revenue growth.”

Intel credited the strength of enterprise server and PC sales for the big improvement. Data center chip revenue was up 32 percent compared to a year ago, while PC client division revenue was up 17 percent. Intel Atom revenue was up 4 percent. Average prices for microprocessors, which are the brains of personal computers, were up compared to the previous quarter.

For the second quarter, Intel projects revenue to be flat at $12.8 billion, plus or minus $500 million. It is also targeting a gross profit margin of 61 percent. For the full year, Intel expects to spend $10.2 billion on capital spending, such as new chip factories. Uncertainties include the situation in post-quake Japan, where a market slowdown could have an effect on Intel’s business.

Intel got a boost of $496 million in revenue during the quarter from its acquisitions of Infineon Wireless and McAfee. Both deals closed during the quarter. Interestingly, even though Intel spent more than $7.6 billion in cash on McAfee, the company still has $11.5 billion in cash after today’s report. That’s what you call a cash-generation machine. Intel also benefited from an extra week in the first quarter, compared to the usual 13 weeks. Intel’s goal is to grow earnings by double digit percentages this year.

While the consumer markets were slow in Europe and the U.S. in the first quarter, the enterprise strength and the growth of consumer markets in emerging regions made up for that. Emerging markets such as China and Brazil now have more than 2 billion consumers who could buy a PC at a cost of one or two months of income.

Intel also had its best launch ever with the debut of its Sandy Bridge chip, which combined a microprocessor and graphics in the same chip. There was a flaw in the Cougar Point chip set that accompanied Sandy Bridge, but Intel said it recovered from that flaw more quickly than it anticipated.