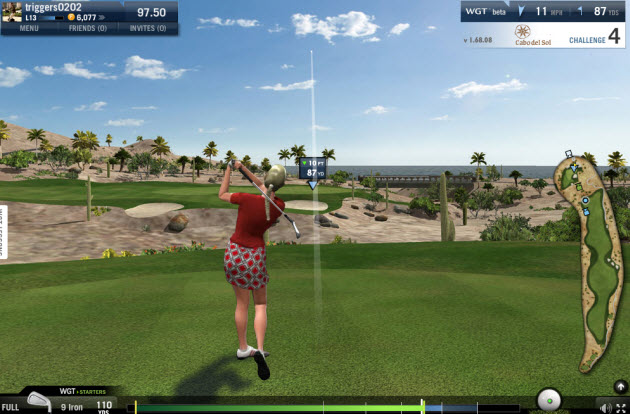 World Golf Tour, the maker of a realistic social golf game on the web, is announcing today that it has partnered with golf simulator company TruGolf to dramatically expand the number of virtual courses for its users.

The expansion will help World Golf Tour more deeply engage its 4 million-strong players on the web. While those aren’t huge numbers for a game, they’re pretty big for golf, and the thing about golf players is they tend to be rich. That’s a good audience for advertisers to target. TruGolf, which spun out from Access Software in 1999, makes realistic online golf simulations in a 3D animated environment.

San Francisco-based World Golf Tour offers its own realistic golf experience, where a user can play at a famous course and see a realistic view of what it’s like to play the course from the golfer’s point of view. World Golf Tour created this browser-based online simulation by snapping pictures of famous courses from almost every point of view and then incorporating those images into its golf physics engine. Users have played more than 100 million rounds of golf on Facebook and the web, going on foursomes with buddies and chatting via internet voice connections. The average game time is 30 minutes.

But one of the obstacles to growth is that it takes a lot of work to add new courses. Each course has thousands of 3D renderings of a golf course, all from slightly different views. In the deal with TruGolf, WGT players will get access to more than 100 more golf courses from around the world, said Chad Nelson, president of World Golf Tour, in an interview. YuChiang Cheng, chief executive of WGT, said the partnership will let TruGolf and WGT develop courses in parallel.

TruGolf’s team built the technology behind Microsoft’s Links game, one of the best-selling PC games of all time. The first TruGolf course to be added to WGT is Cabo del Sol, a resort course in Los Cabos, Mexico, designed by golfer Jack Nicklaus. TruGolf courses will be available to WGT players for a “small greens fee,” while the 12 existing WGT courses are free of charge. Normally, WGT makes money through sponsorships and partnerships with the real course owners.