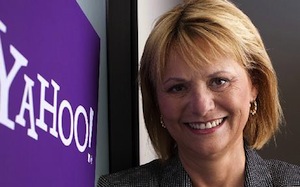 Yahoo chief executive Carol Bartz said today that the company’s “turnaround is proceeding on-schedule” and that she’s “very confident” in where Yahoo is headed.

Bartz was speaking on the analyst conference call for Yahoo’s first-quarter earnings. Yahoo may have performed on the high side of its past guidance for the quarter, but the numbers weren’t stellar — revenue fell 6 percent from a year ago, to $1.06 billion, while earnings per share declined 23 percent to 17 cents. AllThingsDigital notes that those numbers are essentially flat, when you exclude the temporary benefits that Yahoo saw last year from the sale of Zimbra to VMware and the beginning of its partnership with Microsoft.

There are signs of growth, Bartz said. She pointed to the fact that Yahoo sites saw 15 percent more visitors last quarter and that its pageviews were up 8 percent. She also said that Yahoo is finally “shipping the new major technology platforms” that the company has been working on in the past. The company’s infrastructure is now faster, more flexible, and powers websites that can be more interactive, she said.

Bartz did acknowledge one area of disappointment: The search advertising integration with Microsoft. Advertisers are getting a good return, she said, but those ads are seeing fewer clicks than either Microsoft or Yahoo expected. In fact, that would have had a bigger impact on Yahoo’s revenue if Microsoft hadn’t guaranteed a certain level of clicks in the deal.