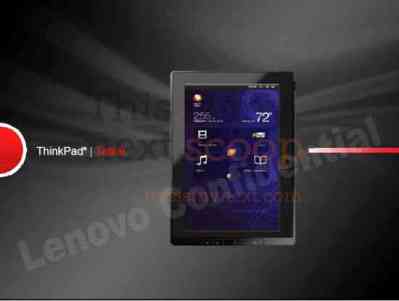 Forget the BlackBerry PlayBook. Lenovo is getting into the business slate arena with its upcoming ThinkPad tablet, and it looks like the company is leveraging all of its enterprise experience with the ThinkPad brand to create something truly innovative.

According to leaked slides sent to This is My Next, the ThinkPad tablet — also referred to as the ThinkPad Slate — isn’t your typical iPad clone: it’s going to have a keyboard portfolio case, which will let you easily convert it into a notebook, and an optional capacitive stylus for note-taking.

In short, it appears as if Lenovo is focusing heavily on productivity with the ThinkPad tablet, something that others, including the iPad and PlayBook, have mostly regarded as secondary to consuming content.

The ThinkPad tablet doesn’t disappoint when it comes to specs either: it will sport a dual-core Tegra 2 processor, a 10-inch 1200 by 800 pixel screen, front and rear cameras, and just about everything you’d expect in a modern Android 3.0 tablet. At 1.6 pounds, it’s slightly heavier than the iPad 2.

Lenovo promises that the tablet will feature “seamless integration with your existing IT infrastructure,” including support for Cisco’s enterprise programs, as well as Symantec, McAfee, Computrace, and more. This may not mean much to the average user, but it’s good news for IT departments who are now faced with fitting tablets into their current corporate setups. RIM’s BlackBerry PlayBook has also been trying to sell itself as the perfect IT solution, but given its current dependence on BlackBerry phones and RIM’s infrastructure, it’s not exactly something that every IT department would jump to adopt.

Judging from the slides, it also looks like Lenovo has heavily tweaked Android’s interface. Joanna Stern from This is My Next likens it to the company’s Skylight interface for its upcoming consumer-focused LePad tablet. Clearly, it seems like Lenovo is aiming for a clear brand identity with its future tablets.

At this point, it looks like Lenovo is aiming to release the ThinkPad tablet at some point in the summer (the slides reference both July and August as potential launch dates) for $499.

One other point worth mentioning: The slides also hint that Lenovo is looking to release a 7-inch tablet later this year.